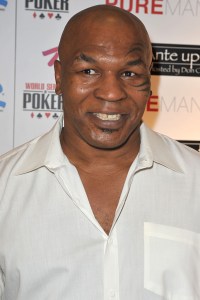 Mike Tyson could have his own Eight is Enough show as he welcomes baby number eight to his brood. The boxing legend and his wife, Lakiha Spicer Tyson, are going to have a fighter on their hands with this new baby boy.

According to People magazine, Mike Tyson’s littlest champ weighed in at a healthy 8 lbs. and 13 oz. and came in at 19 inches. As for the name, Tyson and Lakiha Spicer Tyson went with flair — Morocco Elijah Tyson.

Has a nice ring to it, doesn’t it?

The couple was married back in 2009 just weeks after Mike Tyson’s daughter Exodus tragically died after an accidental treadmill incident.

Mike Tyson has been a busy man, taking on not just fatherhood, but creative projects as well. Tyson will soon be seen making a cameo as himself in The Hangover 2 when it hits theaters on May 26 and his new Animal Planet series, Taking on Tyson, premieres March 6. What will his new series feature? Tyson’s love of pigeon racing, of course. We know we’ll be watching, will you?

Congratulations go out to Mike Tyson and Lakiha Spicer Tyson on the birth of their baby boy, Morocco Elijah Tyson. It certainly is baby central in Hollywood.