Top Chef star Padma Lakshmi is gearing up for a battle royale with her baby daddy Adam Dell. 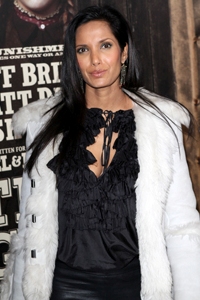 When Padma Lakshmi, star of Top Chef, gave birth to her daughter Krishna Thea Lakshmi last year, little was said about the baby’s father. Turns out it is none other than Adam Dell — venture capitalist and brother of computer king Michael Dell — and trouble is brewing on the custody front.

After the birth of little Krishna, Padma and Adam put together a temporary, out-of-court custody agreement giving Dell visitation rights nine days a month. The agreement is good until the baby’s first birthday, coming up quickly on February 20.

But talks to renew the agreement have fallen apart.

According to TMZ, Adam Dell just can’t let go of his distinct distaste for the name Padma chose for their baby. In fact, the site says Adam launched a four-hour tirade in the hospital over the moniker just two days after baby Krishna was born.

Adam is also complaining that he is only being allowed to see the baby seven hours a week, but sources close to Padma say she has never denied him requested visitation.

Padma thinks Adam has ulterior motives: Forcing a relationship between the two of them. They only dated intermittently in the first place, and she has never requested child support from her billionaire baby daddy.

Dell was reportedly miffed about the custody agreement as far back as last March, when Krishna was only a month old, telling guests at a backyard barbeque that Padma was not being very accommodating.

“An agreement was made with the biological father that was very fair. It’s unfortunate if anything inappropriate is being said,” said a friend of Padma’s.