Oprah revealed on Monday that she has a long-lost sister, and the media magnate says they are getting to know each other step-by-step. 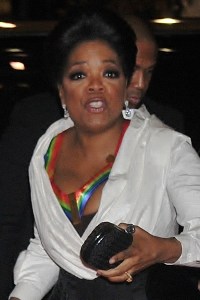 On The Gayle King Show, Oprah Winfrey said she and her newly-discovered half-sister Patricia are taking their time getting to know each other.

“We’re taking it slow,” Oprah told her BFF Gayle. “I think it’s about building a relationship one conversation — one experience — at a time.”

Oprah and Patricia have bonded over family issues and enjoy each other’s company.

“I think we have the common interest of our mother,” Oprah told Gayle. “Everybody who’s dealing with an ailing parent understands that process of getting care for them. And we’re speaking regularly about that.”

In a stunning twist of fate, Patricia shares the name of Oprah’s other half-sister, who died in 2003 after a long struggle with substance abuse — and the newly-discovered sibling looks eerily like her, as well.

“She coming into the family at this time has been a great peace offering, a great symbol of peace-making in this family. I would say I see her as a gift.”

As Oprah’s closest confidant, what is Gayle’s take on the issue?

“As someone who’s been in the position of reuniting people… for her to be the person that’s being reunited was certainly a big shock to her,” King said. “She wants to get to know her she says, woman to woman, and try to see where it goes, but she is certainly open to having a relationship.”

“This is extraordinary that somebody would have this information about Oprah, who as you know has been sold out on many occasions by friends, by co-workers, in some cases family, with stories that weren’t as legitimate as this,” King said. “Patricia wasn’t trying to get Oprah, she was trying to find her mother… having Oprah as a sister, a half sister, was a bonus.”