Los Angeles locals got used to seeing Orlando Bloom on the town with his pup, but now he has a much more handsome sidekick to keep him company when he’s tooling around without the missus, Miranda Kerr. Bloom and Kerr’s newborn son Flynn made an appearance at Will Rogers State Park in Pacific Palisades January 23 with dad and of course, cameras were there to catch the debut. 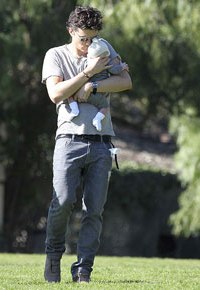 Though this is our first peek at the little man with dad Orlando Bloom, the photo of the Lord of the Rings and Pirates of the Caribbean star that is making the rounds today is not actually little Flynn’s official debut.

“On the 6th of January I gave birth to our beautiful little son Flynn,” Kerr blogged. “He weighed 9lb 12 ounces (a very healthy and big baby boy). I gave birth to him naturally; without any pain medication and it was a long, arduous and difficult labour, but Orlando was with me the whole time supporting and guiding me through it. I could not have done it without him. We are so happy and are enjoying our time together as a family. He is our little ray of sunshine.”

“We wanted a natural and very personal photo to share with our fans hence selecting this one,” Kerr posted later, in response to fan comments. “He is our little bundle of joy and we wanted to share him with you all as I know a lot of you were waiting to see him, wanting to know his name and have supported both Orlando and I throughout our careers and throughout my pregnancy.”

The proud parents have been together since 2007 and secretly tied the knot back in July 2010. News of their pregnancy broke when Kerr started showing in pics on her Kora blog back in September, and then we got a sneak peek of Flynn when Kerr rocked her seven-month baby bump in a nude shoot for W magazine’s December issue, but he was still hiding inside for that one!