Justin Bieber has a movie coming out. At least that’s a little less shocking than a 16-year-old writing his memoirs. Our entertainment editor has seen it and all he can say is “it’s a pretty inspiring story.” When you wake up from that dead faint, check out the videos and movie poster that the banged one has finally released. 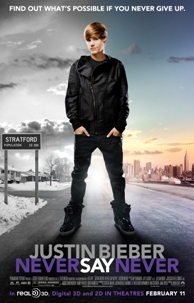 Sure, the Internet has brought us ex-boyfriends via Facebook and instant messaging. We can find restaurants quickly and our tiny magic box that sometimes works as a phone can tell us if we’re going in the wrong direction.

It also brought us the tiny wonder that is Justin Bieber. Whether you think that’s the most wonderful thing in history or you involuntarily brush your bangs back whenever you hear his name, the Biebs isn’t going anywhere. He has…a memoir. Yes, this 16-year-old kid has lived enough life to write a book.

And now Bieber has a film coming out. In 3D. Because how else can you experience the wondrousness that is Justin Bieber? Two dimensions just aren’t enough.

I tease. The kid actually has talent.

At our early screening of his new film Never Say Never, which premieres February 11, we were pleasantly surprised. In fact, we want to see it again.

Well, a brand new poster has been released, along with a new video. Check the video out below!

We’re pretty sure Bieber fans will drool over the sight of him in black leather. If you plan on camping out to be first in line for the show, I’d get your Bieber pillow case and Bieber body pillow, call the dog sitter and head out now. I bet you’re not first in line for Never Say Never.

Prepare to be inspired!