Willow Smith isn’t a one-hit dance-beat wonder. The breakout sensation is teasing her new track, 21st Century Girl, and it will make you shake it! 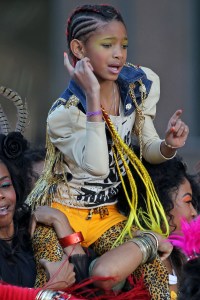 Fans need to recover from their Whip My Hair whiplash pretty quick because Willow Smith is getting ready to do it all over again with her hot new single 21st Century Girl. We all know she’s the daughter of Will Smith but we don’t need to keep leading with that because she’s coming into her own. The 10-year-old trailblazer recently shot a new video for the follow-up to Whip My Hair — 21st Century Girl.

Fans were lucky enough to catch some of 21st Century Girl on Willow Smith’s Facebook page on January 23. The groove is set to make you move and even though she’s young the girl can lay down a track.

By the time she gets done teasing us with her singles, we’ll be ready for the real deal. Willow Smith’s album is set to drop under Jay-Z’s Roc Nation label sometime in the spring.

“It is very cool, because Jay really welcomes me and makes me feel like the record label is a place where I can have fun and talk about my career,” Willow revealed in Vanity Fair‘s February issue. “He and his people make me feel like I’m a part of something. And I love Beyonce — she’s awesome!”

Are you excited over some new Willow Smith music? Are you still whipping your hair back and forth? We sure are!