Bret Michaels underwent successful surgery to close a hole in his heart. 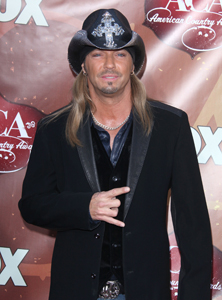 Poison frontman Bret Michaels underwent surgery to close a hole in his heart at a Phoenix hospital — and the procedure was a success!

The Rock of Love star had to treat his brain hemorrhage before moving ahead with the heart repair.

“I’ve done a lot of neurological tests, and they say I’m about 95 percent there,” Michaels said. “I still have a little ‘funk’ with my left hand that I haven’t quite figured out, but I think with a little more therapy, by one full year [after the hemorrhage], I’ll be as good as I’m going to get.”

The newly-engaged Michaels checked into St. Joseph’s Hospital in Phoenix Sunday night for the procedure to fix the opening between the two sides of his heart.

“Barring any complications, I should be out within three to four days,” Michaels said. “Then, I will be down (resting) for three weeks. I don’t know if I can sit around for that long, but I’ll try my best.”

Meanwhile, Michaels can revel in the cash he just earned selling his 1969 Camaro at the annual Barrett-Jackson collector car auction on Sunday. His sweet ride went for $200,000, all of which Michaels is donating to the Juvenile Diabetes Research Foundation.