As congratulations of Sir Elton Hercules John are in order, Elton John is talking about how fatherhood has changed his life.

Elton John and his Canadian filmmaker husband, 48-year-old David Furnish, recently welcomed their son Zachary Jackson Levon Furnish-John to their world. The tot was born to a surrogate mother on Christmas Day, 2010. The mother wishes to remain anonymous. 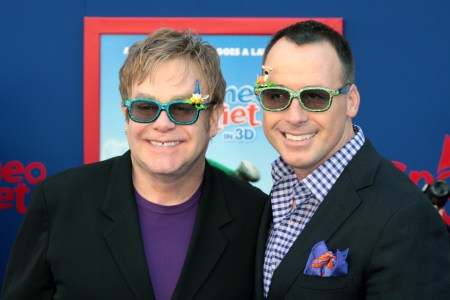 Levon is the name of an Elton John hit which was inspired by Levon Helm of the Band. According to Jon Bon Jovi, it’s the Bon Jovi lead singer’s favorite song ever.

Sixty-three-year-old John recently told People magazine that fatherhood “is surprisingly very relaxing because this little soul that you are feeding, changing, bathing and that you’re telling bedtime stories to is a blank palette, a blank canvas and all it needs is love and nurturing.”

He joked, “When he gets to talking and running around I’ll probably feel a little different. But the adventures in daddy-land — it’s fantastic!”

John and Furnish live in a 32-story building in Beverly Hills, however, young Levon lives with his 24-7 nannies in a small adjoining apartment next to David and Elton. Word has it that they hope to advise the boy, spoil him with love but not spoil him materially. That may be difficult.

John composed the music for the animated film Gnomeo & Juliet which is scheduled for release on February 11 in the U.S.