The man who made Clerks with his own savings is at it again. Now a Hollywood player, Kevin Smith promised to auction off his new film Red State after its Sundance premiere. Instead, Smith surprised the crowd by going into a diatribe against the Hollywood system and announced that his own Smodcast Pictures will handle the distribution for Red State.

Kevin Smith created some serious hype about his new film Red State before ever hitting the 2011 Sundance Film Festival. When news spread that the “horror” film was inspired by Westboro Baptist Church leader Fred Phelps and was about the “dark heart of America,” members of that church declared their intention to protest. Smith countered that he and his producer Jonathan Gordon would be there too. 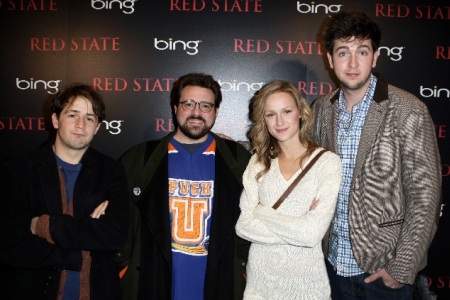 Smith ratcheted up the Red State buzz by claiming the film would be auctioned off for distribution after the Sundance Festival screening, and by the time the festival kicked off, he had one of the hottest tickets in town.

When the big night finally arrived on Sunday, January 23, the picketers were easily outnumbered by Smith’s supporters and the hype took a turn. It turned out, the auction had just been a publicity stunt.

Instead, during a diatribe against the Hollywood studio distribution system after the screening, Smith bought the distribution rights for his movie for a cold $20 and revealed he would use his 1.7 million Twitter followers, his enormous podcast following, a 15-city tour with castmembers and word-of-mouth to release the picture himself.

“I’ve built a little audience of sorts,” Smith said. “There’s the Twitter thing, of course, but we have the Smodcast network, the podcasts that we do online. Used to be a hobby: Now we make money off it. The two most listened to podcasts pull in about 300,000 listeners per episode. Via that and Twitter, I’ve been able to sell out Carnegie Hall without spending a [expletive] dime in marketing.”

Smith recounted his movie past, before he outlined the math Red State would face if it was purchased by Hollywood. He explained that Red State was an uber indie project, with everyone involved taking pay cuts and sleeping on hard mattresses to make the film in under a month with a budget of just under $4 million.

Then he added up the additional costs that come with distributing through the Hollywood business model — a few million for the sale, around $20 million on promotion, etc — to give an idea of how much the movie would have to make to just break even. 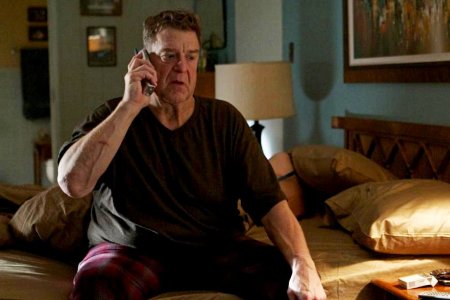 “The idea of giving somebody else five times the budget of a movie for the movie that we all collectively made, tried our asses off real hard, just seems obscene,” he said. “It took seven years for Clerks, a movie that cost $27,575, to go into profit… I ain’t playing the game the way you all play the game anymore, which is sell it and someone pours money on it… We’re not going to spend a [expletive] dime on marketing.”

The film is set to premiere in theaters October 19, the 17th anniversary of the release of Clerks, but first Smith is taking Red State on a month-long, cross-country tour (see dates below). The preview tour kicks off March 5 at Radio City Music Hall in New York and tickets may run as high as $60, but Smith says it will be worth the extra cash.

Smith’s stand at Sundance goes beyond Red State. He announced he’ll take off his director’s hat after wrapping his next film, Hit Somebody, in order to focus on his fledgling Smodcast Pictures, which will help other indie filmmakers avoid the Hollywood distribution machine and get their movies out on their own.

“Don’t hate the studio; BECOME the studio,” said a release on the Red State website. “Anybody can make a movie; what we aim to prove is anyone can release a movie as well.”

Tickets go on sale January 28 for the following shows: