Pioneering fitness guru Jack LaLanne passed away Sunday at 96. Read on to find out how his healthy-living philosophy will live on for future generations.

Fitness guru Jack LaLanne passed away Sunday from pneumonia complications at his California home. He was 96. 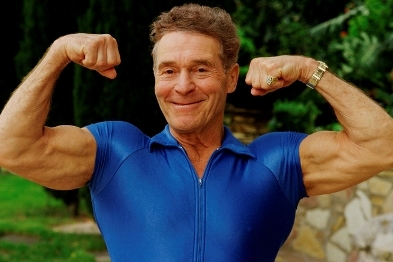 LaLanne inspired generations of men and women to get off their couches and get healthy — and he promoted physical fitness before it was the popular thing to do.

“I like to consider myself as your personal physical instructor and your health consultant coming into your home every day,” LaLanne told his audience — mostly women — during his weekly tv fitness program.

He became popular with housewives who wanted company during their husbands’ workdays — and he provided the safe comfort.

“Make me a promise,” LaLanne said during one episode. “C’mon, raise your right hand. Say, ‘I promise that I will be with you every day this week, Jack.’ ‘Cause I have so many fantastic things to show you and tell you, and they’re all to you from me.”

In later years, LaLanne and his wife, Elaine LaLanne, became the face of a number of healthy-living products, including the famous Jack LaLanne Power Juicer.

He even released a book last year to mark his 95th birthday — Living Young Forever — that detailed his positive, healthy lifestyle and secrets to a long life.

Despite his passing, LaLanne will live on through his work.

“Though we are saddened by our father’s passing, the overwhelming response from fans and the media has made us all feel he is still with us,” LaLanne’s son, Jon LaLanne told TMZ Monday.

LaLanne is survived by wife Elaine and three children.