Oprah Winfrey promised she’d reveal a big family secret on her Oprah Winfrey Show and it was not a ploy — she introduced the world to the half-sister she never knew existed. 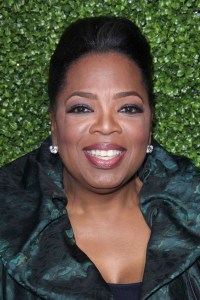 During Monday’s Oprah Winfrey Show, the open-book host let us in on one more secret she recently learned herself — she has a half-sister named Patricia living in Milwaukee. Winfrey said the secret “shook me to my core,” but “it’s true.” Oprah Winfrey learned the shocking secret of her half-sister just before Thanksgiving 2010 and only a “handful” of people knew.

Oprah Winfrey’s half-sister Patricia was bounced around from foster home to foster home from an early age. At age seven, Patricia was finally adopted but she always knew she wanted to be reunited with her birth mother. She became a single mom to a daughter at 17 and had a son six years later. She tried to find her birth mom at age 20 but it never came to anything. A few years ago, her son encouraged her to try to find her birth mother again and it led her to Oprah’s mom, Vernita Lee.

Through a package of birth information, Patricia was able to trace a few key pieces back to her birth year of 1963, including two siblings that had died and a third that was still alive. A month after receiving the information, Patricia was told her birth mother didn’t want to see her. That same day, a story involving Vernita Lee, Oprah Winfrey’s mom, came on the news and she talked about the details of her deceased children, including their names. The exact same information was found in Patricia’s birth information, including the fact that she shared the same name as one of her non-living siblings — could Oprah Winfrey be her living half-sibling?

Patricia’s son went online and matched Oprah’s birth year to the information in the birth document and it was a match. Patricia held on to this information from 2007 until now. She took a DNA test with her deceased half-sister’s daughter Alisha and it confirmed the news.

Just before Thanksgiving, Oprah Winfrey knew something was going on in the family but no one would tell her. Finally, her assistant broke the news that Patricia in Milwaukee was her half-sister. Oprah and Stedman drove to meet her new half-sister on Thanksgiving and the rest is media history.

So, why tell the world on live television? Oprah Winfrey had her reasons and they were validated. With the way the media works, there was no way she could keep this a secret and she “wanted you to hear it from me first.” Oprah Winfrey has had her fair share of media scrutiny and this was her story to tell in her own way.

What do you think of the latest Oprah Winfrey news?