Whether starring in a romance, drama or comedy, it’s official: Natalie Portman can do no wrong. The Black Swan star and her costar Ashton Kutcher are enjoying comedy success with a No Strings Attached box-office win. 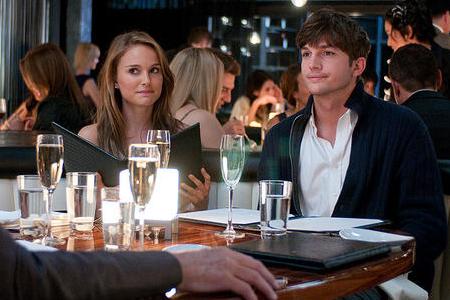 The Best Actress Oscar hopeful just nabbed Best Actress at the Golden Globes and now she’s sitting in the number one box-office spot with No Strings Attached, which took in an opening weekend total of $20.3 million. Maybe hooking up with a friend isn’t so bad after all, unless you’re playing on-screen friends with benefits, then it can get a bit nerving. No Strings Attached star Ashton Kutcher recently revealed his on-screen love tryst with Natalie Portman wasn’t as easy as it looked. “It’s always sort of awkward and giggly, right? Because you’re there and you’re with someone you sort of know, and there’s a lot of people watching,” Kutcher explained. “It’s always kind of in-between scenes you try to make jokes and divert it, ‘Oh it’s not a big deal,’ try to make it seem like it’s not a big deal.”

Coming in just behind No Strings Attached was the Seth Rogen action flick The Green Hornet with $18.1 million, bringing its gross total to $63 million. The Vince Vaughn comedy The Dilemma came in third at $9.7 million, making its box-office total over $33 million so far.

Rounding out the top five were the Colin Firth-led film, The King’s Speech, with $9.1 million and True Grit with $8 million. The King’s Speech has managed to rake in $58 million at the box office and recently took home top honors at the Producer Guild of America Awards, sending the film into Academy Award nominee buzz.

Natalie Portman’s other little film Black Swan, which will most likely earn her an Academy Award Best Actress nod, took the number six spot with $6.2 million while The Fighter came in seventh with $4.5 million.

Little Fockers came in at $4.4 million while Yogi Bear skated just behind with $4.1 million. Tron: Legacy rounded out the top ten, bringing in $3.7 million.