The woman who initially accused Lindsay Lohan of assaulting her in rehab — and later reneged — has been trying to broker her cooperation for cash. 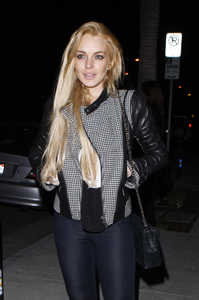 Dawn Holland, who accused Lindsay Lohan of assaulting her in the Betty Ford Center and was later fired for breaking confidentiality rules, has been shopping around a deal in an attempt to buy her cooperation.

In an email to RadarOnline, Lindsay’s father Michael Lohan explained the shocking story:

“From the night of this occurrence, I have been aware of the entire situation.

Dawn DID assault Lindsay while demanding a urine [test] and took it to another level when Lindsay demanded the phone.

Since then, Dawn has had her attorney meet with me, negotiate with me and even propose a ‘deal’ with me, her lawyer and Lindsay’s lawyer, Shawn Holly [Chapman] and while I agreed to Dawn Holland’s initial ‘number,’ to procure financial stability due to getting fired, she got greedy and took it to another level.

Dawn demanded that Lindsay agree to a sit down interview to make ‘amends’ for the sake of the public not because Dawn wanted to set the record straight, but because she negotiated a deal to make more money from the interview.

When Lindsay said that amends don’t need to be a public thing, and she would NOT do it publicly, Dawn fired her lawyer and hired another one out of vengeance.

With Dawn Holland’s record for abuse, her assault charges, her credibility and desire for money, I believe that the courts and public will see, that this is a woman, who motives and intentions [sic], to set Lindsay up, so she could have financial gain.

If she really was or is in ‘recovery,’ she would seek it in an emotional way, rather than financial.

If this was any other person, in the same situation, Dawn, nor the authorities would ever pursue it in this fashion.”

Holland is now threatening to go back to authorities and change her story for a third time, pointing a finger at Lindsay and threatening her probation.