No Strings Attached asks a profoundly current question of our times: Can two people in a purely physical relationship not drift into the land of love?

In the film, Ashton Kutcher and Natalie Portman play a couple who meet, hook up and then try to figure out who and what they are. Kutcher’s character is a producer on a Glee-type show who is also the son of a huge 80s sitcom star [Kevin Kline]. Portman is a doctor who doesn’t have time for a relationship. Both are navigating the dating world of Los Angeles when they meet (again) at a street fair. 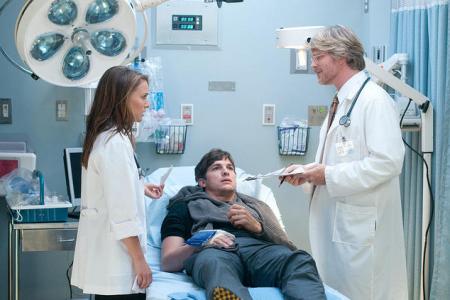 The No Strings Attached couple first meets at camp when they’re teenagers, as shown in the film’s opening moments. It’s established in that first scene that Portman’s character is not affectionate and has no place in her heart for love. When they see each other again in LA as adults, the spark is immediate; at least it’s portrayed that way.

Unfortunately, we adore the movie’s leads and Ashton Kutcher is at his best, but their chemistry sometimes falters. Much of that has to do with Portman’s character being completely unlikeable. The audience is never really given any reason why her character is so hardened against love and meanwhile Kutcher’s character is slowly but surely falling madly in love with her. The compassion for Portman is never there and unfortunately, it hurts the film.

How can a romantic comedy work when the audience is not pulling for the couple to get together?

Elizabeth Meriwether’s script misses the mark more often than not. Except for Kutcher, her characters are one dimensional and many scenes are almost, well frankly, insulting. There is a scene where all of Portman’s friends have their period at the same time. The scene is supposed to result in hilarity. Sure, women’s cycles may occur at the same time, that is not the problem. The issue is how are we supposed to believe that a room full of female doctors has the time to sit around complaining about their discomfort? It might be possible, but not when the set-up of the movie is that this doctor [Portman] has no time for a relationship, yet she has the freedom to take days off to sit in bed? We don’t buy it. In fact, many women I screened this movie with found the scene appalling. 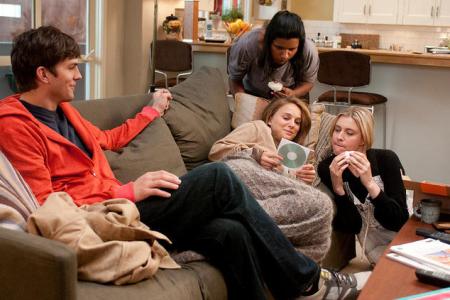 At times, No Strings Attached is as funny as it is romantic, but also at times, it’s difficult to embrace. The formula is familiar, but that isn’t what causes No Strings Attached to fall apart. Director Ivan Reitman’s skills are known — he directed Stripes, Dave and Ghostbusters — but his handle on the romantic comedy genre is loose at best in No Strings Attached.

The characters are never allowed to become appealing to the audience. It’s frustrating because the movie can be utterly charming in parts, but then the audience is faced with the cold hard fact: Why are we pulling for Kutcher’s character to pursue Portman’s character when the entire time we’re wondering, “Why on earth are you waiting around for a woman who is cold and, at times, mean?”

Being a romantic comedy, there are some predictable storylines that we see in a million rom-coms. Many times, audiences can just shrug away the stereotypical plot points, but in No Strings Attached — on top of everything else that is wrong with this film — it is too much to bear. The end of the movie race to tell the person how much you realized you loved them, in No Strings Attached, is an eye-rolling moment. By that point in the film, as an audience member, you simply do not care.