Kyle Richards has taken to her blog to explain — and apologize for — the huge blowup between her and sister Kim Richards on the season finale of The Real Housewives of Beverly Hills. 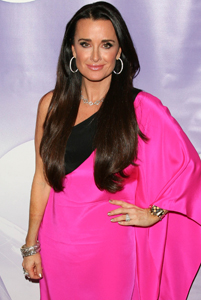 Kyle Richards and her sister Kim Richards had a nuclear meltdown of a fight on last night’s season finale of The Real Housewives of Beverly Hills. What happened, and have they kissed and made up?

The real story is complicated, sad and messy — just like real life.

In an open letter on her blog, Kyle wrote:

“This is a very difficult blog to write. There’s so much pain and emotion in this episode. It feels so strange to even refer to it as an ‘episode.’ This is my life. This is Kim’s life. I wish we were just characters on television, but this is all too real.

That night never should have happened. It was incredibly difficult to go through in the first place and it’s even more difficult to watch and relive it.

Throughout the season I have come across as angry toward my sister. At times, it seemed unwarranted. I know that. I know how bad it looked. The truth is, I was angry. There were problems brewing between my sister and me off camera. I’m not good at hiding my feelings as well as others, so I brought my feelings in front of the cameras. Viewers only know what they see, and sometimes, they saw me reacting with force and emotion that didn’t seem to make sense.

First off, let me say, I love my sister so much. Sometimes, I wish I loved her a little less. You may be thinking, ‘You have a funny way of showing it.’ And you’re not wrong. However, our arguments were never about what was happening at that moment. My mom used to say, ‘They’re crying about the apples, but it’s really the oranges,’ and that’s exactly what was happening here. The tension between Kim and me was never about her not ‘having my back’ in New York. There is so much more to it than that. I didn’t want to come out and say what it was that was really bothering me because this is a private family matter. It would have saved me a lot of criticism, believe me, but it’s not just my story to tell. It’s Kim’s story too.

After this horrible argument between Kim and I, we didn’t speak for a long time. My heart was broken and I suffered an incredible amount of anxiety and panic attacks. Next to losing my mother, this was the most difficult time of my life. It is so difficult for me to even write about it now.

The details of what happened with Kim after that night, is her story to tell. I will not go into that here. I do want to say that I have learned a lot about my sister and myself during the taping of this show. I have been able to look at our relationship from an outsider’s point of view. I’ve realized that my pain and worrying about her comes off as anger. It was not helping Kim or our relationship. I love my sister and only want the best for her. Kim knows that.

I would also like to clarify, that I do not resent my mother in any way. After losing her, I felt that it was not only my job to look after Kim, but all of the sisters jobs to look after each other. I think my frustration came from feeling as if I were ill equipped to handle it at times.”

As far as “what happened with Kim after that night,” rumor has it she checked into rehab but left after only a week.

Kyle went on to express her sympathy and sorrow for the messy divorce costar Camille Grammer is going through and says she wishes she could rewind the clock on their friendship.

What’s next for the Real Housewives? Stay tuned for the reunion special next week!