On the heels of her engagement announcement to Jesse James, Kat Von D showed off her new engagement ring. 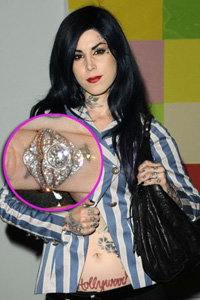 Kat’s ring is from Neil Lane (who also created rings for Nicole Richie and Jessica Simpson, among others). It is a four-carat-plus platinum and diamond ring and is from his archival collection.

“It’s a beautiful ring set with a central round diamond in the middle with smaller surrounding diamonds for an overall dome shape. It has a delicate filigree pattern with very pretty scroll-work,” Lane says.

In case you were wondering, Jesse also used Neil Lane for his engagement ring to ex-wife Sandra Bullock.

James took to Twitter yesterday to express his love for Kat Von D, tweeting: “An amazing woman who stood behind me when the world turned their backs. I have never met anyone so kind and loving and committed to making the world a better place every day. My love for her is beyond description. So honored that she said ‘yes.’ Growing old with her is going to be a (expletive) blast!”

What do you think of Kat’s engagement ring? Do you think it is too traditional — and not edgy enough? Or do you love it?

Read on for more Jesse James