Camille Grammer is sharing shocking details about how she found out her husband was leaving her for another woman. 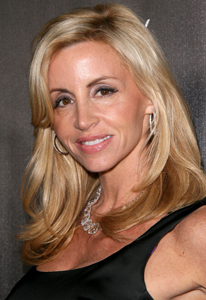 On the season finale of Real Housewives of Beverly Hills, Camille Grammer skipped Taylor Armstrong’s birthday bash to commiserate with BFF D.D. about her crappy week in New York — where she found out her husband was leaving her for another woman!

Kelsey Grammer had called Camille the week before to dump her (over the phone, classy) but asked her to accompany him to the Tony Awards as a favor. She agreed, but when she showed up it went downhill fast.

When Camille Grammer arrived at the family’s New York City apartment, a doorman Camille hadn’t seen before refused to let her in. “You’re not Mrs. Grammer,” he said. Why the confusion? Kayte Walsh, Kelsey’s flight attendant girlfriend, had been using that moniker to get in the building with Kelsey’s blessing! Camille had to show him ID to get into her own apartment.

“It was so humiliating,” she said. “When we got back from the Tonys, he laid down next to me and he put his arm around me. He snuck out as soon as I went to sleep. Who is this woman? Does she not know that she’s destroying a family? She’s destroying my children. They’re going to be just devastated without their dad.”

Kelsey Grammer is trying to push through a quickie divorce so he can marry Walsh in February.