Donald Trump will be a grandfather again! His daughter, Ivanka Trump, is pregnant with her first baby. 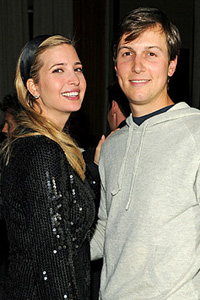 Trump, 29, made her announcement via Twitter. “I have been wanting to share some amazing news with you all for some time… I’m pregnant! Jared and I couldn’t be more excited.”

Married for just over a year, the couple plans on moving to a four-bedroom, 4,200-square-foot penthouse at Trump Park Avenue. Originally priced at $20.8 million, the couple will get a bargain and purchase it for $16 million.

Trump is reportedly due this summer, along with a slew of other celebrities who have recently announced their pregnancies. The newest Trump will have fun playing with cousins Kai, 3, and Donald John III, 19 months — the children of her brother Donald Trump Jr. The Donald’s son with wife Melania is just 4 years old as well!

Read on for More on the Hollywood baby boom