Lady Gaga surprised fans by giving them a sneak peek of her new song off her Born This Way album during the Thierry Mugler fashion show. 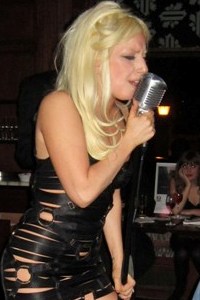 Fashion watchers at the Thierry Mugler show in Paris got a treat this week when Lady Gaga debuted her new single on the runway. Her new album, Born This Way, is not slated to be released until May, but her futuristic sounding dance track was perfect for the Mugler show, not to mention that her own personal stylist Nicola Formichetti is the creative director.

Lady Gaga tweeted earlier this week: “I’m the musical director for the Mugler fashion show. I’m remixing-previewing a record on Born This Way, tailored for the show and garments.” That was followed by her tweet this morning, saying to check out her remix of music from the Born This Way album. “Thank you for the amazing comments.”

The new song from her album, titled Scheiße, is a special re-mix without the chorus included. Fans will have to wait until May (or possibly the Grammys!) for the full version.

The track is sung mostly in German and the accompanying avant-garde video features Rick Genest, who is heavily tattooed in a skeletal design. He was reportedly Formichetti’s muse for the Mugler show and is as creepy and cool as the music.

This is the first new song released from Lady Gaga since Alejandro in May of last year. Do you want to hear more? Lady Gaga will perform the title track from her new album at the 53rd Annual Grammy Awards in February.

Read on for More Lady Gaga