Willow Smith is gearing up to star in a remake of a beloved children’s classic: Annie. 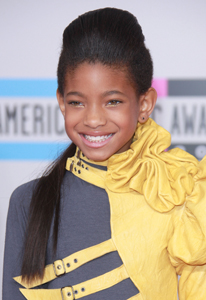 Willow Smith is wasting no time following in the famous footsteps of the rest of her family. After breaking into the music biz with her hit Whip My Hair, the young daughter of Will Smith and Jada Pinkett-Smith is hoping to star in a remake of the beloved children’s classic Annie.

Variety reports that Will Smith is exploring the possibility of remaking the classic musical with Sony Pictures — and none other than Jay-Z is in talks to collaborate on the tunes.

According to Variety, “Project reps were tight-lipped about whether the pic would be a contemporary version and whether it will include any original songs.”

It is no accident that Daddy Smith went to Sony for the deal: The studio produced The Karate Kid remake, which starred Willow’s big brother Jaden Smith and made more than $350 million worldwide.