You love her stares, her quippy lines that say a lot with just a few words. She’s Donna from Parks and Recreation, which returns to the NBC Thursday comedy lineup tonight at 9:30. We caught up with actress Retta on the TCA red carpet last week to get a bit of a hint about what’s coming up next for the show. We also got a bit of back story from the lady herself.

SheKnows: So tell us a bit about what we’re going to see coming up on Parks and Recreation. 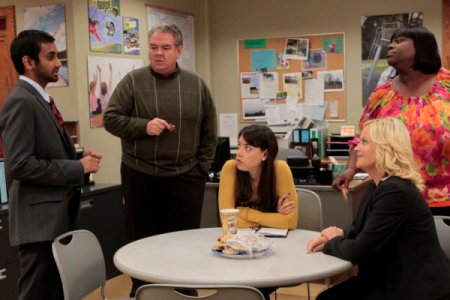 Retta: Well, this season we’re going to see some new hook-ups, and my character Donna kind of helps out Ann (Rashida Jones) on how to get her dating life back in order. That was fun to do.

SheKnows: You know Donna is my favorite character. Those amazing “looks!”

Retta: Thanks! And she has a lot more to say this season. I got off pretty easy in the first two seasons. I got to say my interjections and give my looks. Now I actually have to learn lines. [Laughs] So…I’m pretty excited about that.

SheKnows: This show is such a fan favorite. They’ve really stuck with you guys. What do you want to say to them?

Retta: Keep watching! [Laughs] Seriously, I don’t like, toot horns or whatever, but the writers are really, really funny. Particularly this season, they’ve so figured us all out. I mean, there have been table reads where we were dying laughing. Not to say that people don’t blow smoke, but we were dying laughing to the point where, you know, I was getting a headache. So I can’t wait for this stuff to air.

SheKnows: I’ve been watching since the beginning, but the show has really become all about the characters and their ins and outs and their quirkiness.

Retta: It definitely has. Obviously with more time you get to learn more about the characters. But I feel like the writers…the actors are obviously learning as we go along, but the writers so know it that you read the page, and you can see the expressions. As you’re reading you can see what Tom’s (Aziz Ansari) face is going to look like. You know what Leslie’s (Amy Poehler) face is going to look like and how she’s going to act in that moment because she so nailed it.

SheKnows: Tell us a little secret fact about your character.

Retta: A secret fact about my character. [Laughs] You know, I’ve been trying to get the writers to say that I’m divorced so I have all this money, but I just want something to do with my day, so that’s why I work in the parks department. We’ll see if I get it, but as far as I’m concerned, she’s got a lot of alimony. That’s how she can afford that damn Mercedes.

Parks and Recreation returns tonight at 9:30 p.m., following The Office on NBC.