How do you get people to stop talking about the exit of your show’s star, Steve Carell? Bring in Ricky Gervais, the Brit who created the original The Office and played Michael Scott’s counterpart in it! 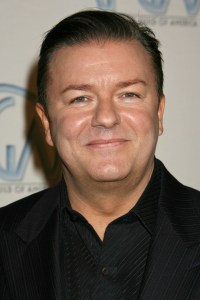 Since The Office came to America, fans have been dying to see UK creator and star Ricky Gervais make a cameo. Now, with Hollywood still buzzing over Gervais’ controversial Golden Globes hosting gig, it seems it is indeed happening. Steve Carell’s Michael Scott will run into Ricky Gervais’ David Brent in the January 27 episode of the NBC series.

“It’s outside of the office, and it’s just the two of them interacting,” Paul Lieberstein (Toby, producer of America’s The Office) told Vulture. “It’s just a little nod to Steve and his final year. We didn’t even tell NBC at first. So [Ricky] worked for free. But don’t print that — it might get him in trouble with the INS.”

The no longer top-secret cameo will come in the first minutes of the episode, which has Andy hosting a small business seminar “with the help of some special guests.” Michael is there to mock Andy’s event, so the run-in could play into that storyline, but it could also simply serve as a stand-alone treat for fans.

Since Carell announced his impending exit last summer, there’s been much muttering over how the show can carry on and who might take Carell’s place as the big boss. As mentioned, it turns out Carell will be leaving The Office even earlier than expected.

“Steve will have a number of episodes that dramatize and lead up to his leaving,” Lieberstein said. “Then we’ll continue on for about four more episodes, and the spring will prove to be not about an actor leaving, but what happens in an office when a manager leaves and the chaos ensues and people vie for the job and are uncertain about their future.”

Contenders for Michael’s job include Darryl, Dwight, Andy and Mindy, but applications are also being taken from former guest stars. Kathy Bates revealed at the TCA that she’s heading back for a few episodes, but her character Jo Bennet isn’t likely to land the job, considering Bates has a new gig as the star of Harry’s Law.

Don’t let Gervais’ cameo give you any ideas, either. The new boss will not likely be Gervais, whose career has skyrocketed since his two years with the UK The Office and the success of the US version, not to mention The Office remakes in France, Germany, Brazil and Israel.

“There’s no way,” Carell told ABC News this summer. “He doesn’t want to do that at all. He sent me a nice e-mail when I announced I was leaving. He’s really sweet.”

Look for Gervais to make his big cameo visit in the first minutes of the January 27 episode of The Office on NBC. Gervais is also set to appear on Piers Morgan Tonight tonight, January 20; is debuting his new series An Idiot Abroad on the Science Channel, Saturday, January 22 at 10; and kicked off season two of HBO’s The Ricky Gervais Show on Friday, January 14.

The final episode with Steve Carell is expected to air Thursday, April 28, 2011, but rumor has it producers are suggesting Michael may make his own cameo returns down the line. Carell is also set to return to NBC as the showrunner for the tentatively titled The Post-Graduate Project, a single-camera comedy about “a small-town post office frequented by a quirky but tight-knit group of local twentysomethings.” He and David Steinberg (Seinfeld, Curb Your Enthusiasm) are also developing a documentary on the history of comedy; and Carrell has wrapped shooting for Crazy, Stupid, Love, which costars Ryan Gosling, Julianne Moore and Emma Stone and is due out July, 2011.