George Clooney contracted malaria, an illness passed on from mosquitoes, while in Africa. 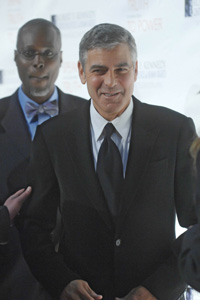 George Clooney is recovering from malaria, a disease passed on from mosquitoes that can be fatal if not treated properly. He contracted it while in Africa doing charity work.

“I guess the mosquito in Juba looked at me and thought I was the bar,” Clooney joked to CNN’s Piers Morgan.

Morgan tweeted after the interview that this is Clooney’s second bout with malaria and that he is taking medication, but “feeling rough.”

Despite this tweet from Morgan, his rep tells People that he is recovering well. “George is completely over the malaria he contracted while in the Sudan during the first week in January,” his rep says. “This illustrates how with proper medication, the most lethal condition in Africa, can be reduced to a bad ten days instead of a death sentence.”

George Clooney, 49, was in Africa trying to push for diplomacy to prevent another genocide in the Sudan region, prompting Morgan to joke, “You don’t think President Bashir has detached a detail of sickly, vengeful mosquitoes to target you whenever you arrive?”

“Yeah, I think so,” Clooney quipped back.

It sounds like the handsome Clooney has plenty of women volunteering to nurse him back to health, judging by Morgan’s latest tweet: “Clooney malaria update: now have 24,563 offers to nurse him. But his rep says medication’s worked and he’s OK. Sorry, ladies.”

The interview with Clooney will air on Piers Morgan Tonight on CNN this Friday.