As if Arcade Fire, Eminem, Cee Lo Green, Lady Gaga, Miranda Lambert and Katy Perry weren’t enough reason for you to watch the Grammys, we’ve got a few more names for you. Justin Bieber, Bruno Mars, Lady Antebellum and for all you Twilight fans out there, Muse! 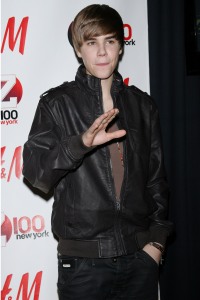 The Grammy awards are always interesting. Wild outfits, crazy speeches with multiple bleeps, performers flying through the air…but we really watch to see our favorite musicians perform. The Grammys have quite a lineup this year.

Arcade Fire, who we’ll also get a chance to see at this April’s Coachella festival, will perform, along with comeback king Eminem, Cee Lo Green (Did you see him on SNL with Gwyneth Paltrow?) and the notorious Lady Gaga. Anyone want to speculate on what she’ll be wearing this time? I’m going to go ahead and guess a dress made entirely of clear hamster balls, complete with fuzzy little hamsters. Come on, I can’t be that far off. We’ll also see Miranda Lambert and Katy Perry.

We’ve got some new performers to watch as well. Twilight fans love Muse, and even those of us who aren’t exactly into the fangless vamps get into their music. The always fabulous Lady Antebellum and the adorable (oh, come on…you know you want to fold him up and put him in your pocket) Bruno Mars will rock the stage. And yes, Justin Bieber will be there too. Like he’d miss an opportunity to promote his new 3D film. Will this be the moment he debuts his new, bang-less do? Just kidding ladies. I couldn’t resist.

Are you guys watching the show? Who do you want to see up on stage, thanking the magic fairies and agents that got them this far? Let us know. The Grammys will air Sunday, February 13 at 8 p.m. on CBS.