The Sundance Film Festival opens today in Park City, Utah. Sure, some people are just going to hit the slopes, but there are some pretty cool films premiering. If you’re following along on Twitter, here is your guide to keeping track of the buzz. 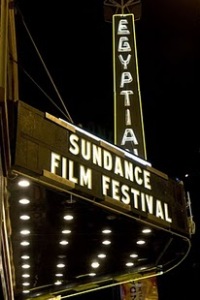 A lot of us, myself included, wish we could be bundled up, walking from indie film to indie film this week at Sundance. But alas, it was not in the stars. I’ll be following along with all the Twitter buzz like the rest of you, trying to make sense of what coolness those lucky ducks are seeing. Here is the coolness they’ll be checking out today at the Sundance Film Festival.

3:00 p.m.: All That Is Solid Melts Into Air
Sundance says: Powerfully juxtaposes two documentary videos, which are projected on opposite sides of the room — one depicting a Nigerian guerrilla group battling the colonization of petroleum resources on their land, and the other showing Chicago stock traders speculating on energy futures. The viewer, caught between the videos, negotiates these two scenarios. As the films play, the stakes rise, and the intensity crescendos to an uproar.

6:00 p.m.: Sing Your Song
Sundance says: From civil rights and women’s issues to public health and the environment, theories of social change abound. Increasingly film provides an effective tool to generate momentum around issues, with people behind these movements seeking to change attitudes, and ultimately to change lives. Profiles singer Harry Belafonte.

6:30 p.m.: The Guard
Sundance says: Sergeant Gerry Boyle, a salty village cop in Ireland, has a subversive sense of humor, a caustic wit, and an uncanny knack for keeping people at arm’s length. When a straitlaced FBI agent chasing an international drug-smuggling ring hits town, Boyle has no intention of letting the arrival disrupt his routine of hookers and wisecracks. Initially, he relishes offending and ridiculing the agent, but a murder and a series of peculiar events draw the reluctant sergeant into the investigation.

9:30 p.m.: Pariah
Sundance says: At the club, the music thumps, go-go dancers twirl, shorties gyrate on the dance floor while studs play it cool, and adorably naive 17-year-old Alike takes in the scene with her jaw dropped in amazement. Meanwhile, her buddy Laura, in between macking the ladies and flexing her butch bravado, is trying to help Alike get her cherry popped. This is Alike’s first world. Her second world is calling on her cell to remind her of her curfew. On the bus ride home to Brooklyn, Alike sheds her baseball cap and polo shirt, puts her earrings back in, and tries to look like the feminine, obedient girl her conservative family expects.

9:30 p.m.: Project Nim
Sundance says: From the Oscar-winning team behind Man on a Wire comes the story of Nim, the chimpanzee who, in the 1970s, became the focus of a landmark experiment that aimed to prove an ape — if raised and nurtured like a human child — could learn to communicate using sign language. If successful, the consequences of the project would be profound, breaking down the barrier between man and his closest animal relative and fundamentally redefining what it is to be human.