Sandra Bullock’s cheating ex Jesse James has proposed to girlfriend Kat Von D, and she accepted. What a difference a year makes…or should we say, seven months? 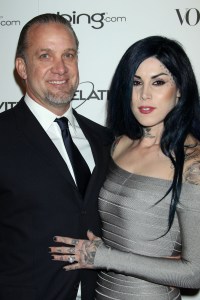 Jesse James has taken serious flack since news broke last awards season that he’d been cheating on Hollywood darling Sandra Bullock. With the public in an uproar over James’ affair with Michelle “Bombshell” McGee and possibly others, it looked like the philanderer was paying for his dalliances, but now it seems it all worked out for James and his “best friend” Kat Von D.

“You know sometimes the public and press gets it wrong. This is one of those times. 2010 was actually the best year of my life because I fell in love with my best friend. An amazing woman who stood behind me when the world turned their backs,” James told People. “I have never met anyone so kind and loving and committed to making the world a better place every day. My love for her is beyond description. So honored that she said ‘yes.’ Growing old with her is going to be a [expletive] blast!”

After Von D was caught sporting a new sparkly bauble on her ring finger at the Art of Elysium charity gala January 15, James tweeted, “@thekatvond Baby? You make it so easy to do everything I can to show you how Amazing you are. I see it as clear as a bell. My other half.”

“@FreeJesseJames Thank you always supporting me and believing in everything I do. But most of all, thanks for being my best friend,” Von D responded.

The pair will split their time between James’ Austin home base, where his kids are, and Los Angeles, where Kat’s LA Ink tattoo parlor is located.

“Having two places we call home will be good for now,” Von D told People. “In the end, home is where the heart is, and my heart’s with him.”

Von D was professing true love from the moment she and James went public with their “surprising” relationship last September, just months after Kat Von D split from rocker Nikki Sixx and the Bullock-James divorce was finalized. In recent months, Von D and James have gone overboard with their Twitter PDA.

Sandra Bullock, meanwhile, has bounced back from her painfully public breakup, with some help from her new little man Louis, whom she adopted on her own after the breakup. While looking hot as ever, Bullock has also gotten support from friends like Proposal co-star Ryan Reynolds, but told America to not get any ideas about them.

“I think there will be a collective sigh amongst women across the United States when I say he’s not my lover,” Bullock said. “He’s just an amazing friend for 10 years… but I don’t get his loving after dark.”

SheKnows wishes Kat Von D and Jesse James congratulations and hopes outlaw James has learned a lesson about keeping it in his pants, so they can live happily ever after.