Cecelia Ahern, author of P.S. I Love You, just released her new novel. Perfect for anyone who has ever wished they could predict their own future, The Book of Tomorrow dazzles with both magic and suspense. P.S. We love Ahern and she scores another winner with this lovely book. 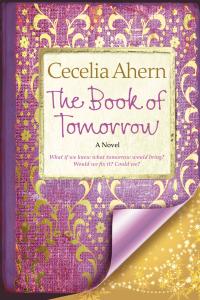 At the age of 21, Cecelia Ahern delivered an unforgettable story with P.S. I Love You. Her amazing debut novel not only captivated readers, but also became the basis for the classic chick flick film starring Gerard Butler and Hilary Swank.

Now with her latest novel, The Book of Tomorrow, in bookstores everywhere, Ahern has done some magic again. P.S. I Love You fans rejoice.

The Book of Tomorrow

Sixteen-year-old Tamara Goodwin is a wealthy girl whose world is turned upside down when her father dies and leaves behind nothing but bitter memories and debts. Forced to sell everything they have, she and her mother move to the country where it is hard to embrace a lifestyle completely alien from the ultra-posh life they have enjoyed in the city. Bored and lonely, Tamara visits a traveling library, where she discovers a strange leather-bound book.

When she pries open its locked, golden clasp, she finds something unimaginable: Diary entries written in her own hand, dated the next day. When the events of the following day mirror those predicted by the diary, Tamara decides to use this fantastic book to her advantage. But as she sets out to unravel family mysteries using the magic of the book of tomorrow, she discovers that some secrets are perhaps better left concealed.

In addition to P.S. I Love You, Cecelia Ahern is the author of Love, Rosie, If You Could See Me Now, There’s No Place Like Here, Thanks for the Memories and The Gift. Cecelia is the daughter of Ireland’s former prime minister, and currently lives in Dublin. P.S. I Love You is currently on the shortlist for the “Irish Book of the Decade.”