The Office scene-stealer Angela Kinsey has come a long way from her upbringing in Indonesia. She lived in Jakarta where she first discovered her passion for performing. When she was 14, Kinsey moved back to the United States when her family moved to Texas. 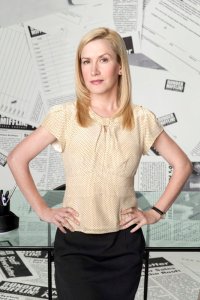 It was in the Lone Star State in college that Kinsey knew that her joy of performance, particularly comedy, would be her life’s work.

In 2005, she auditioned for the part of Pam on The Office and wound up scoring the role of Angela Martin. As Angela Martin, she is often the foil to almost everyone in The Office, much to the chagrin of their faithful if foolish leader, Michael Scott. Steve Carell is moving away from the Michael Scott character at the end of this season and Kinsey tells us exclusively about the mood on the set as the Steve Carell curtain call happens.

Kinsey is mother to two-year-old Isabel Ruby Liberstein and also lets us know how having a baby girl has completely changed her life and altered her perspective on the life versus work balance.

SheKnows: How are things in Angela’s world today?

Angela Kinsey: Let’s see, [laughs] my daughter is at pre-school. I have men drilling under my house and I’m taking down my Christmas decorations while we’re talking right now.

SheKnows: We’re really excited for The Office to come back.

Angela Kinsey: I am too! I think we have some cool episodes ahead of us especially with Steve’s departure.

SheKnows: Obviously it’s been a kind of shadow, for lack of a better word, over the season this year but has it been noticeable on the set or is it just another day at the office? Sorry for the pun…

Angela Kinsey: [Laughs] Actually it’s been very electric to be honest. Everybody came back to work this year with a sense of wonder. When you’re in season seven, you don’t always have a sense of wonder. So we were all sort of like, “What’s going to happen?” It gave the set this really jazzy energy because we love Steve. He’s become such a dear friend to me. I’ll miss my friend, but as part of the show — when you have a mix-up like that — a little bit of a shakeup brings on all kinds of new exciting avenues to go down. We’re pretty excited. What will be the demise of Michael Scott? Is he going to leave a hero or a fool or who knows? It’s kind of an exciting time for us on the show. That’s the way we look at it. It’s actually kind of fun.

SheKnows: You’ve got some background in improv. I notice some of the actors on the set and some of your guest stars, perhaps, don’t have as much. Is that ever an issue or is it just a welcome to the family kind of thing? 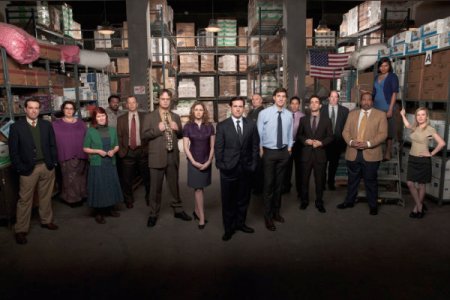 Angela Kinsey: Definitely welcome to the family. We’re a pretty warm welcoming group. I’ve seen one or two who have a moment of deer in the headlights, whoa, whoa…we just went off the train tracks [laughs]. The Office is so great with casting and also gives us people who know how to hit the ball back. It’s such a real gift on our show that we get the opportunity to do that.

SheKnows: Was there a moment where you realized that improv and comedy specifically was kind of a forte of yours, that you kind of wanted to get that again and again?

Angela Kinsey: You know, I was so fortunate when I was a kid. I grew up overseas in Indonesia. I went to an international school and they had an amazing theater department. We had a teacher there that really started teaching improv young to students — very simple games like three’s tag and things like that. I started doing improv in junior high and I loved it. It really opened up this creative side and gave me a lot of confidence. I started to really have fun. By the time I started doing it in my twenties, it felt like a very natural language that I had learned. I just love it. But, listen, improv — it giveth and it taketh away — especially when I was performing live. You can have one night when you’re a god, you’re so in the zone — sort of like that night at a basketball game where some guy or girl throws it up and every single shot goes in and you think, “How’s he or she doing that?” Then there’s nights where all you do is get backboard and rim.

SheKnows: No matter how many actors I’ve talked to, one of the things that they keep coming back to is the ability to listen. I would think that would be a priceless commodity in improv.

Angela Kinsey: It is. It is the ultimate. I think improv is about listening and reacting. I feel like our show is all about listening and reacting, especially with such a supporting cast. Often I’m receiving information and reacting to it. The more you listen and the more you’re in the moment, the more you play in the present. You’re not trying to think into the future about what you’re going to say next. You’re really paying attention to your partner. It’s actually great relationship advice [laughs]. It’s good life advice.

SheKnows: What first appealed to you about the character of Angela and also a secondary question — how has playing her evolved for you over the years?

Angela Kinsey: To me, it was interesting playing someone that prickly. I’m very Southern and I start a lot of my sentences with “I’m sorry.” To play someone so unapologetic and opinionated, it was sort of liberating. Also as far as an improvisation actor, I always knew my point of view and that was such a gift. No matter what happened in a scene — if Steve Carell started improvising — I knew exactly what my character would do and how she would react to Michael Scott. It gave me great confidence early on in the show to have such a clear view of who she was. Then it’s nice to see her have some layers because some people are like, “Don’t you think she’s a hypocrite or this and that?” I’m like, “No.” She’s become a real person to me. She can be anyone at your country club, or at work, or at your church, at a P.T.A. meeting. She has her own hopes and dreams. I’ve gotten to play her falling in love. I’ve gotten to play her being hurt, being crushed, being jealous, being immature. I’ve gotten to find some layers in her and that has made her more real to me.

Inside the micro world of The Office

SheKnows: Some of my favorite episodes on The Office are when the party planning committee is getting pulled away from you and just the look on your face is comedy gold… 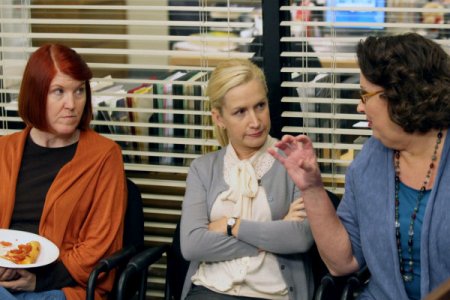 Angela Kinsey: Oh my God! I think I can see a whole webisode series of her dethroning from the party planning committee [laughs]. She really coveted that position.

SheKnows: Speaking of the webisodes, what has it been like for you guys to create off the primetime television grid, so to speak?

Angela Kinsey: It’s really fun. I love the webisodes because we have a huge cast. When we’re all there, we’re about 16 people. What I love about this is you get to see the world within the world. Yes, it’s Dunder Mifflin, but you get to see the hierarchy just in the accountants, just in those three people, or what happens back in the annex with Kelly and Ryan — all of those different little worlds that make up the whole company.

SheKnows: The entire Office experience, like you said with a cast of 16, with so many talented actors and actresses, I would think even coming to work would serve as an inspiration for you as a performer.

Angela Kinsey: Absolutely. I think a lot of us feel like we won a lottery ticket especially if your background is comedy and improv [laughs]. We have the most amazing writers. They’re always bringing new interesting things to our show, then to be in a scene with Steve Carell and Rainn Wilson and Jenna Fischer and Brian Baumgartner, the list goes on and on and on — every single week someone does something that I’m being blown away by. Every week I’m like, “Are you kidding me? That was so awesome.” I so respect my fellow actors and our show. I’m so proud of it and I just think it’s a real gift to be able to love your work that much.

Up next in our exclusive interview, Angela Kinsey tackles topics wide and far, from Ricky Gervais to motherhood.