The long-awaited premiere of American Idol finally hit the small screen complete with new judges Steven Tyler and Jennifer Lopez and our old friend Randy Jackson. Since it’s premiere week, you know what that means — auditions! 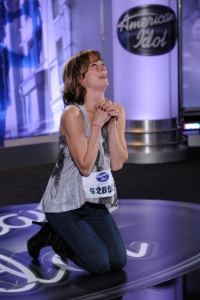 American Idol season 10 might be the coolest season yet for two reasons — Steven Tyler and Jennifer Lopez. Idol’s premiere lit up the Fox network like the Fourth of July with these two new faces and thank goodness for that because some of those auditions needed some spark.

The first stop on the first day of auditions, aka the premiere, was New Jersey. Watching Steven Tyler scat and sing random words was hands-down the best part of some of the auditions. Seeing Jennifer Lopez get “street” on some of the young dreamers was a close second. Aside from the obvious dynamic personalities these two bring, they really have earned the right to sit in those judges’ chairs. Steven Tyler brings his big voice to some of the segments, which fans will love, but he also brings an instinctive and smart presence that no one else can possibly offer. He knows what formulas work and which don’t. He’s honestly there to find the best-of-the-best in the only way that Steven Tyler can — by being himself! Side note, the lady contestants love him! Hello, it’s Steven Tyler.

Jennifer Lopez is there for a purpose too and it isn’t just to look pretty. She means business and she is challenging these kids to not only come back for Hollywood week with new material, but with a new image. She wants to see stars and the singer, dancer and fashion icon is more than qualified to expect and ask it of these American Idol hopefuls. Way to be assertive Jenny from the block — we like your style.

Then there’s our loyal dawg, Randy Jackson. He is not the same Jackson I’ve seen for nine seasons. He’s a bit more in control and not as likely to laugh off a bad singer. He goofed around with his new judges but he wanted to see good singers rather than say yo, yo, yo. American Idol couldn’t have put together a better panel to make us say, “Simon who?” We say that with respect, of course. 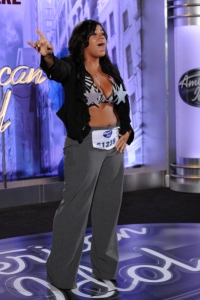 As for the actual New Jersey auditions for American Idol, there were a lot of young talented singers with the age change. Take musical theater student Kenzie Palmer, for example. The 15-year-old singer’s gorgeous voice, courtesy of tons of practice, got her to Hollywood week but it took some convincing. Jennifer Lopez saw her potential but Steven Tyler was borderline. His “yes” came with coaxing. She really did have a great tone to her voice — good choice, guys.

With the state of the world, some families are obviously suffering hard times and it brought out kids like Travis Orlando who wanted to help. Travis detailed his time in a shelter but after hearing him sing there’s no doubt he’s going to be a star. He performed a fantastic rendition of Eleanor Rigby — fun fact, David Cook owned this song during his season. Steven Tyler asked for another song to judge him on and Travis broke out a little Jason Mraz, I’m Yours. No question, he’s going to Hollywood.

Okay, there always has to be a good singer with an outrageous look — you know the one we can’t believe sounds like an angel. Tiffany Rios may look like she belongs on Jersey Shore, but she sings like she belongs on the stage. She stood there in a bikini top with two giant stars placed where her lady humps were chilling. Then she started singing and who cared about her outfit. She got to Hollywood week with the advice to drop the gimmick.

There were so many bad auditions in New Jersey that we here at SheKnows thought we’d select our favorite awful act of the night. The winner is Yoji Asano. When asked what his story was, he took a moment and came up blank. Oh, wait he remembered, he’s been studying Michael Jackson since before he was born — no seriously, while in the womb. But don’t ask him to show you, he’d rather do Miley Cyrus’ Party in the USA. Picture it, Yoji Pop, that’s his nickname, singing Party in the USA like a chipmunk while dancing like MJ. Ladies and gentlemen, meet your new William Hung.

What did you think of the premiere of American Idol? Did you see an Idol winner in New Jersey?