Jodie Sweetin was surprised at her birthday party — with an engagement ring! 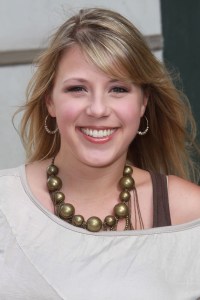 Full House actress Jodie Sweetin had a very sweet birthday. Morty Coyle, the father of her five-month-old daughter, proposed in front of her friends and family!

“It was a complete surprise,” Sweetin told People. “We are just thrilled and I am in shock still!”

Baby Beatrix was there for the proposal at the Kibitz Room in Los Angeles, as were lots of other loved ones.

“I was glad that everybody was there,” she says. “People videotaped it, it was great.”

Little did Sweetin know her friends were in on the surprise!

“My friend decorated the whole place with little diamonds on the table and other touches,” she said.

Jodie’s ring is a 2-1/2 carat sapphire surrounded by diamonds in a unique snowflake design, but just because she has a ring doesn’t mean she’s actually going to get married. Pulling the old Brad and Angelina line, Coyle says, “We want to wait until there’s equality for everybody to get married.”

Um, so why get engaged?

Anyone else get the feeling he gave her a pretty non-engagement ring for her birthday and everyone — including Sweetin — got the wrong idea?

Sweetin, a recovering addict, is divorced from her first husband Cory Herpin, with whom she has a two-year-old daughter Zoie. The couple divorced in 2008.