At long last, we’ve got some news on the next Batman movie, The Dark Knight Rises. We know which villain Tom Hardy will play, and we know the identity of Selina Kyle, aka Catwoman — it is Anne Hathaway about to don the cat suit. 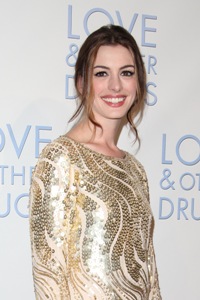 Last time we saw Catwoman, the suit was filled out by Michelle Pfeiffer in 1992’s Batman Returns.

No, I didn’t forget Halle Berry in Catwoman, but that was not the real cat suit and even the lady herself acknowledges the wrongness of that film.

Well, after tons of speculation and a race between actresses like Keira Knightley, Rachel Weisz, Naomi Watts, Blake Lively and the newly pregnant Natalie Portman (yes, you would definitely notice that in a cat suit), we have a winner. News has arisen that Anne Hathaway will be wearing some skin tight togs.

I know I’m talking about the suit a lot, but it’s a fantastic role even without black leather. A seriously flawed antihero and she’s pretty darn dark.

We all know Hathaway can do sweet and bubbly. She can certainly do tragic. But dark? I’ve already been reading tweets wondering if she’s really the right choice. In my opinion, she’s perfect. She can certainly act. You know Christopher Nolan is going to give her some juicy stuff to work with. And it’s a great opportunity for Hathaway to show a different side of herself. Anyone who can pull off bubbly without being incredibly annoying has the chops to do anything. Plus, it never hurts to start out with some doubt. It makes the performance all the more compelling when your socks get knocked off.

We also learned the identity of the villain that Inception star Tom Hardy will play.

Comic book fans know Bane as “the man who broke the bat” because he snapped Batman’s spinal cord in the Knightfall comic book story arc. Not a comic fan? Here is a primer. Bane was born in a prison after his father, a revolutionary, escaped. The fictional Caribbean government decreed that the son would carry out his father’s life sentence. During his years in prison, he reads, learns to fight and carries a teddy bear named Osito (Spanish for “little bear”) with a hole in its back to carry a knife. After becoming the “king” of the prison, the prison controllers force him to become a test subject for a mysterious drug called Venom, which killed everyone else who tried it. After almost losing his life, Bane grows incredibly strong. He needs the drugs every 12 hours or he suffers massive side effects. He has it pumped into his brain via tubes. Whew! Sound like something Nolan can work with to you? I am drooling in anticipation!

So what do you think of Anne Hathaway as Catwoman in Dark Knight Rises? Do you like Bane as the big baddie? Let us know below.