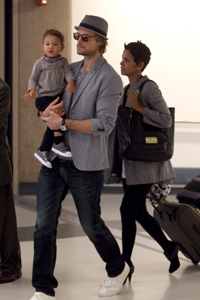 Despite an amicable breakup with Halle Berry, Gabriel Aubry made the surprising move of filing court documents on December 30, 2010, for joint physical and legal custody of their daughter, Nahla.

The papers show that the paternity of Nahla has already been established with him as the father, however, he wants to be legally recognized as the father of their daughter. What prompted the sudden move?

The couple, who were together for five years, announced their breakup last May, but seemed to work out custody on their own without involving the courts. In fact, Aubry made a statement at the time saying that he and Berry would always put Nahla first.

“[Nahla’s] happiness and well-being are the most important thing for both of us,” Aubry told Access Hollywood.

Aubry also said that he and Halle Berry would continue having a warm relationship. “She is, and will forever be, one of the most special and beautiful people that I have ever known, and I am certain that we will continue to have only love and respect for one another,” the Versace model said.

Could Berry’s relationship with Olivier Martinez have anything to do with this? Or is Aubry simply protecting his rights? Either way, let’s hope this is resolved amicably.