There must be something in the water in Hollywood because half of the town seems to be knocked up — or surprising the world with a baby we didn’t even know was coming! Here’s the skinny on who has a new bundle in their arms and who has one (or two!) in the oven. 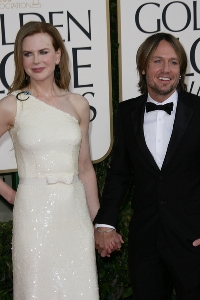 Nicole Kidman, 42, and Keith Urban, 43, shocked the world by announcing the arrival of their daughter, Faith Margaret Kidman Urban! The little bundle, who is Kidman and Urban’s genetic offspring, arrived via surrogate on December 28.

Elton John, 63, and his hubby of five years, David Furnish, 48, welcomed Zachary Jackson Levon Furnish-John on Christmas Day. They too used a surrogate and rumor has it the child shares DNA with the music legend.

Alanis Morissette, 36, and rapper husband, Mario “Souleye” Treadway, 30, also had a phenomenal Christmas. Their son Ever Imre Morissette-Treadway arrived on Christmas Day, which they announced with the statement, “All are healthy and happy.”

John Travolta, 56, and Kelly Preston, 48, made the news when their 16-year-old son Jett died in January 2009. Now, they’re gracing the cover of People mag with their new addition, Benjamin, who was born November 23 in Florida.

There are a slew of good-looking couples in this boom, but the new son of Orlando Bloom, 34, and model Miranda Kerr, 27, struck the lottery in that department. Kerr announced their baby news shortly after their secret July wedding last year and gave birth January 7. 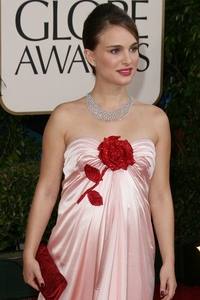 Natalie Portman has been the talk of the town since Black Swan dropped, yet somehow managed to hide her big news, for a short time. Turns out Portman’s not only engaged to choreographer and costar Benjamin Millepied, 33, but she’s also carrying his baby. She gave her man a shout-out when she won the Golden Globe for Best Actress, thanking him for helping her procreate.

It’s standard to hold back on revealing baby news for a few months, especially when it’s the high risk pregnancy of an older mommy or multiples. Mariah Carey, 40, and Nick Cannon, 30, tried to keep their double whammy a secret, but that was no easy task! With everyone clambering for the 411, the couple stayed unofficial until October. Once they confirmed the news, there was a round of speculation about how many buns Carey had in the oven. Carey showed off her bump at numerous Christmas shows and confirmed in December that they are indeed expecting twins.

Spanish hotties Penelope Cruz, 36, and Javier Bardem, 41, were a couple shrouded in mystery, refusing to confirm their status… until they tied the knot in July! Cruz started sporting a baby bump shortly after that, while filming Pirates of the Caribbean 4. 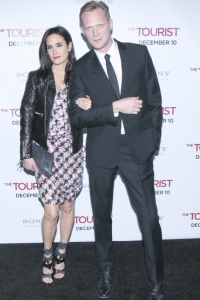 Jennifer Connelly, 40, and Paul Bettany, 39, are expecting their second child and her third. Jewel, 36, and hubby Ty Murray, 41, dropped the news last week that she’s expecting their first. Christina Applegate, 39, and her musician fiance Martyn LeNoble, 41, are expecting a baby any day now. The Game star Tia Mowry, 32, and actor hubby Cory Hardrict, 31, are making a baby on air. A Style Network reality show will follow Mowry until the baby arrives.

Finally, there’s been no official confirmation from the parents-to-be, but word is Kate Hudson, 31, is expecting her second rocker baby, this time with Muse frontman Matt Bellamy, 32. She shares a 7-year-old son, Ryder, with ex-hubby Chris Robinson, 44.

That is some boom! SheKnows sends out congratulations to all the celebs — and any readers — with new bundles in their arms or on their way.