Mel Gibson could be facing criminal charges for allegedly hitting the mother of his daughter, Oksana Grigorieva. 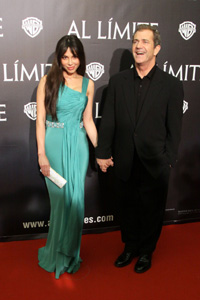 Mel Gibson may be facing jail time if the allegations that he abused ex-girlfriend Oksana Grigorieva hold up. Grigorieva claimed that Mel Gibson punched her in the head last January while she held their baby daughter Lucia.

Radar Online has pictures showing Grigorieva with two veneers on her upper front teeth knocked out and possibly bruises on her face.

In a sworn declaration, Gibson admitted to “slapping” her during an argument, but not hitting her. Audio tapes have surfaced in which Gibson is yelling at the Russian singer — and he even went as far as telling her she “(expletive) deserved it” when she accused him of hitting her.

“The District Attorney has a very strong case, there is a lot of information that the public and Mel Gibson are unaware that the DA has,” a source said.

Gibson’s lawyer, Blair Berk, met with the Los Angeles District Attorney on Tuesday to try to get them to not charge Gibson, however, sources connected to the case are saying it is “inevitable that he will be charged.”

He could be charged with domestic violence-corporal injury which could be prosecuted as a felony or misdemeanor. If convicted of a felony, he could face up to four years in prison. If the charge is only a misdemeanor, he could still spend up to one year in jail.

The couple is in the middle of a bitter custody dispute over their daughter Lucia.