James Franco is quickly gaining a rep as the hardest working man in showbiz. The 127 Hours star has gone for laughs and tears on the big screen, stage, primetime and daytime, while continuing his studies. Now, the Oscar co-host is promising to reveal yet another side by bringing a bit of song and dance to the Academy Awards when he co-hosts with Anne Hathaway. 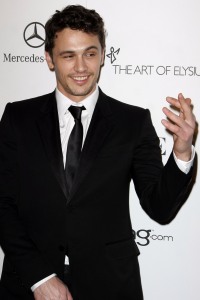 With the Oscars just over a month away, co-host James Franco recently told People he’s “going with the flow,” but it turns out, he did have one special request for his big night with Hathaway.

“He threw down the gauntlet a little bit,” show producer Bruce Cohen revealed. “He said, ‘I want to sing, I can sing.’ I think we’ll be taking him up on his request.”

Cohen also revealed that the show will also do much to honor Oscar’s 83-year history, including awards and mini tributes, a throwback to the 1970 Oscar show and “scenic transitions.”

“Different Oscars are being given out in different settings and contexts throughout the evening,” Cohen explained. “It might be a time, it might be a place, it might be a film, it might be a year, but you’ll know when you’re there … and you’ll see at least one, probably two Oscars presented there. Then you’ll be coming back to today in preparation for your next journey.”

Right now, however, folks are pretty focused on whether or not Franco and Hathaway will prove they are triple threats.

The Freaks and Geeks alum has already proven his chops in just about every other artistic arena. Having landed a Golden Globe for his work in the 2001 biopic James Dean and a nom this year for 127 Hours, Franco is set to return to the soap General Hospital on Friday, February 25 and Monday, February 28.

Word is he’s also signed on to star in and direct The Night Stalker, the film about satanic serial killer Richard Ramirez. He also stars in upcoming releases Your Highness, Caesar and Maladies and starred in and directed The Broken Tower. Then there’s the adaptation of William Faulkner’s As I Lay Dying, which he’s directing; a musical he’s executive producing at Yale; and a series of Funny or Die videos in the works that focus on him, his brother Dave and their friends and family.

Always the academic, Franco earned a BA from UCLA in 2008 and has gone on to masters programs while taking classes in everything from poetry to film to art at Columbia University, NYU, Yale, Brooklyn College, Warren Wilson College and the Rhode Island School of Design.

As if that’s not a full enough plate, the gorgeous star comes through as a philanthropist too. Franco was honored at the Art of Elysium’s 4th Annual Black Tie Heaven Charity Gala on Saturday, January 15, which is where People got the scoop on his plans to dance his way through the Oscars while counting on his co-host.

“She is the youngest to ever host the Oscars so I guess that’s special in itself,” Franco said. “She’s a great person — great personality — so I’m basically depending on her to pull it off.”

While Franco quipped that he may not follow the tennis show advice he got from Billy Crystal, one can only hope his co-host has changed her plan, since she was hoping to take her cues from a now questionable source.

“I’m here to take notes from Ricky Gervais for when I host the Oscars,” Hathaway said at Sunday night’s Golden Globes, and we all know what kind of reception Gervais’ performance has received!

Franco, however, isn’t concerned about his other half.

“I don’t think I could ask for a better co-host,” he said.

The 83rd Annual Academy Awards, hosted by James Franco and Anne Hathaway, will air live on February 27 on ABC at 8 p.m. EST and 5 p.m. PST. The red carpet show starts at 7 p.m. EST.