Miley Cyrus scored big ratings for the Disney Channel with the series finale of her hit show Hannah Montana. 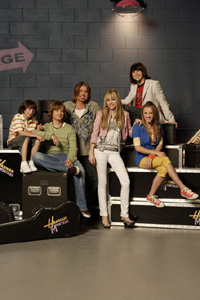 The series finale of the hit show Hannah Montana, starring Miley Cyrus, pulled in 6.2 million viewers for the Disney channel — breaking its record during the fourth season by nine percent!

Hannah Montana debuted in 2006 — when Miley was just 14 years old –and turned her into a huge success, with two full-length spin-off movies, albums, products and more.

The show is about a student named Miley who leads a dual life as the singing sensation Hannah Montana (the blond wig apparently makes her unrecognizable to her friends). The show stars her real life father, Billy Ray Cyrus, plus Jason Earles, Emily Osment and Mitchel Musso.

Her father, Billy Ray, said he admired his daughter for seeing the series through to the end. “Quite frankly, I give a lot of credit to Miley for taking it to another year. She didn’t want it to just end with whatever was the last episode we did. She wanted it to build to where there’s a moral to the story, to where it doesn’t just end and go away and that’s it. She wanted there to be an official ending to Hannah Montana.”

What’s next for the busy 18-year-old? She has several movies in the works, including the movies LOL and So Undercover. She is also rumored to be working on a double disc duet with Jonas Brothers star (and former boyfriend) Nick Jonas.