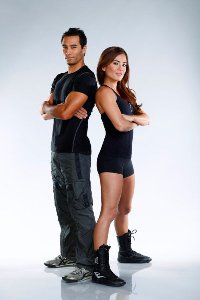 We’ve been teased with the identity of the newest trainers on The Biggest Loser for a quite a while but the wait is over. As Jillian Michaels prepares to leave the weight loss show, we finally got to meet Cara Castronuova and Brett Hoebel, the newest additions to The Biggest Loser.

Cara Castronuova and Brett Hoebel will join Bob Harper, leading the future of The Biggest Loser and those ready to get whipped into shape. You might be wondering if these new trainers are as tough or qualified as Bob Harper and Jillian Michaels. After all, we’ve come to love our favorite kick your butt duo. Let’s see how Bret Hoebel and Cara Castronuova stack up.

Brett Hoebel is bringing his martial arts expertise to The Biggest Loser, more specifically his knowledge in Afro-Brazilian capoeria and Muay Thai kickboxing — sounds dangerous. Hoebel has trained his fare share of Victoria’s Secret supermodels and is also the creator of RevAbs fitness — but does he understand what the contestants are facing? He’s had his own struggles with weight as a kid.

“These struggles have shaped who I am and are why I ended up in this career,” Brett revealed via a release. “They also have helped me better relate to the contestants, and build their trust and respect because they know I went through it and came out on top on the other side.”

What about Cara Castronuova? Don’t challenge her because her ring skills are nothing to laugh at. A native New Yorker, Castronuova has been boxing since the age of five and at one point, turned that into a number two ranked female boxer spot according to USA Boxing.

Like Hoebel, the boxer had her own struggles with weight and watched her father die from obesity when she was a teenager. “Boxing competitively taught me how important it is to never give up, no matter how hard it gets,” Castronuova said.

Wow, the newest trainers seem ready to fight the good fight against obesity.

What are you thoughts now that the trainers full identities have been revealed on The Biggest Loser?