Veteran actress Angie Dickinson was a guest on Live With Regis and Kelly Tuesday and she had a few choice words for the retiring Regis Philbin. What did she have to say? 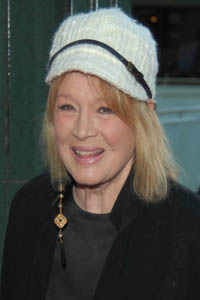 Legendary actress Angie Dickinson stopped by Live With Regis and Kelly Tuesday and offered up a few kind words to Regis Philbin.

Philbin – the show’s mainstay for over 28 years – announced his retirement during Tuesday’s show, saying that 28 years was enough.

“It’s been a long time. It’s been 28 years,” he said. “It was the biggest thrill of my life to come back to New York, where I grew up as a kid watching TV in the early days, you know, never even dreaming that I would one day have the ability, or whatever it takes, to get in front of the camera and talk to it.”

While it’s sad, we know that all good things must come to an end. Dickinson put the audience’s feelings into words when she complimented the veteran host during her segment.

“You know how to make a woman have a good morning,” Dickinson said.

Philbin hasn’t announced an exact date for his retirement, though he said it’ll be at the end of the summer.

Like Angie Dickinson said, we’re going to miss listening to Reeg’s trademark voice each morning. No word on what they’ll do with the show and co-host Kelly Ripa after he retires, but we’re hoping a new host will join Ripa to continue the tradition.

Who do you think can fill Philbin’s shoes?