Ricky Gervais takes to his blog to defend himself after being criticized for being too mean during his Golden Globes hosting gig. 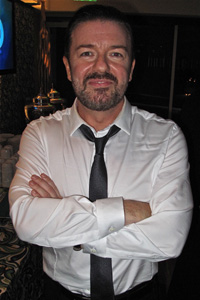 Many celebrities were reportedly upset with Ricky Gervais and his Golden Globes jokes, which picked on many celebrities including Angelina Jolie, Tim Allen, Johnny Depp and more. In fact, Robert Downey Jr. called him out as being “hugely mean-spirited with mildly sinister undertones.”

HFPA President Philip Berk said he did not approve, but they knew what they were getting into when they hired Gervais for the hosting gig. “He definitely crossed the line. And some of the things were totally unacceptable. But that’s Ricky,” Berk said.

Ricky Gervais has taken to his blog to come to his own defense, writing:

“Obviously the rumour that the organisers stopped me going out on stage for an hour is rubbish. All the same conspiracy theories as last year too…’so and so was offended’…’hasn’t been invited back yet’…exactly the same as last time. ‘Paul McCartney was furious’…no he wasn’t. And nor was Tim Allen and Tom Hanks. I was drinking with them after.”

“I did every link I was scheduled to do. The reason why the gaps were uneven is because when I got the rundown I was allowed to choose who I presented to, [and I chose] the spots that I had the best gags for.”

“I enjoyed the Globes more this year. I think I had better gags. More along the lines of the Mel Gibson one last year.”

Tell us: Do you think Ricky Gervais went too far? Or do you think the celebs are being overly sensitive?

Read on for more Golden Globes 2011