Unless you’ve been living under a rock, you know all about the late Stieg Larsson’s Lisbeth Salander novels. You’ve certainly seen the pictures from the upcoming second film version of The Girl With the Dragon Tattoo. Well, The Guardian is reporting that there will be another novel to wrap up the first three! 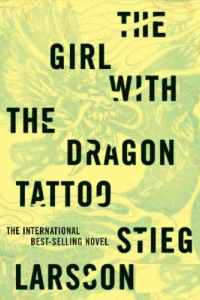 You’ve probably read the books. You may have seen the films starring Noomi Rapace. We’re certain you’ve heard of the upcoming David Fincher film The Girl With the Dragon Tattoo starring Rooney Mara. (Check out the Rooney Mara shots we ran here.)

There are three books in the Millennium series by the late Stieg Larsson, but according to his partner Eva Gabrielsson, there may be one more.

Gabrielsson tells The Guardian that Larsson had written 200 pages of a fourth book before he died of a heart attack at age 50. Her upcoming memoir Millennium, Stieg and Me reveals the existence of the work and the fact that they were often writing partners. She isn’t giving many details, but she does say that Lisbeth “little by little frees herself from her ghosts and her enemies.”

She plans to finish the book if or when she gets the rights to the work from Larsson’s family. Larsson died before any of the books were published. They went on to sell over $20 million worldwide.

Have you read the books? Seen the original films? Are you looking forward to David Fincher’s film? Do you plan to read Gabrielsson’s memoir? Let us know below.