Howard Stern has no love for Jay Leno, accusing The Tonight Show host of stealing material. 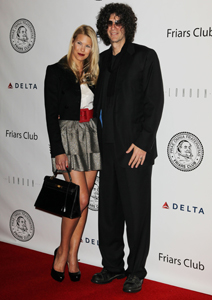 Stern, who has never made his feelings against The Tonight Show host a secret, went all out in his tirade against the comedian. “He’s not fit to scrub David Letterman‘s feet,” Stern told Morgan.

“Jay is insane. And Jay is a crook. And the world knows exactly what he’s up to. He steals a tremendous amount of material,” Stern said, adding “this guy’s ripped off like ten major things from my show.”

One such bit? A chicken that predicts football game winners. Howard pitted sidekick Artie Lange against a live chicken to make bets in the office football pool (the chicken won). Leno aired a nearly identical bit in 2009 and was promptly called out by major mainstream media outlets like ABC News.

Howard Stern has accused Leno of theft often throughout the years, including the “earn your plugs” segment and “Jaywalking,” which Stern says is a blatant rip-off of his “Homeless Game.”

Leno even wooed Stern’s popular correspondent Stuttering John over to The Tonight Show.

“I don’t know how [Leno has] beaten David Letterman in the ratings,” Stern rants. “America must be filled with morons who at night lay in bed… the ones who are watching him, they must be in a coma.”