After spending time at the Betty Ford Clinic, Lindsay Lohan is staying clean and has passed all random drug tests. 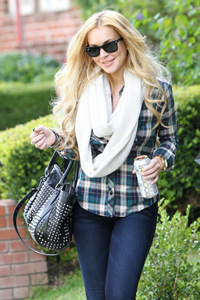 It has been two weeks since Lindsay Lohan has left the Betty Ford Clinic and she is on the right track with staying sober.

Her father Michael Lohan told Radar Online that she has passed all drug tests.

“Lindsay is doing four or five tests a week and she has passed all of them with flying colors,” Lohan said. “She’s doing really great right now. She is serious about staying healthy and is avoiding all the old things she used to do.”

The 24-year-old actress is reportedly living a low-key lifestyle — staying out of the bars and away from parties. In fact, she skipped the Golden Globe parties and watched the award show from home!

What is next for Lindsay Lohan?

She will go back to court on February 25. She may have to face the consequences of an alleged assault against an ex-Betty Ford employee after the Palm Desert police delivered the police report to Judge Elden Fox.

“Judge Fox read the report and put it back in Lohan’s file,” a source said. “Right now, based on what he has read, he won’t be taking any action against Lindsay.”