Grand Slam champion Venus Williams is getting criticized for the short and skimpy blue dress she wore at the 2011 Australian Open on Monday.

The tennis world is abuzz with Venus Williams and her questionable fashion choices while playing tennis. She showed up at the 2011 Australian Open on Monday wearing a short blue dress that barely covered her upper thighs with short black shorts underneath. 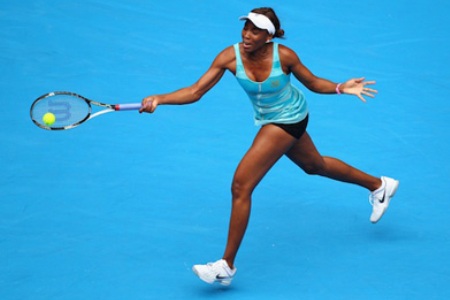 The seven-time Grand Slam champ won against Sara Errani, however, more talk is focused on her outfit than her win! US Open broadcaster Dick Enberg wondered if she uses her outfits to distract her opponent, while John McEnroe said she just looks uncomfortable in it because she kept “tugging at it.”

She spoke with reporters and said she almost wore nude shorts (like the revealing outfit she wore at the French Open — see photo below), but changed her mind at the last minute.

“It really was an ‘Illusion’ dress, the illusion when I wear the nude shorts under,” Venus Williams said. “But at the last minute I decided not to.”

When asked why she changed her mind, Williams said she “just decided to wear the black [shorts]. But, you know, it’s just about focusing on the dress and not anything else. I mean, I had black shorts under…Of course, it’s all sports gear.”

She has a point — it is not like she was wearing skimpy underwear, but black shorts. 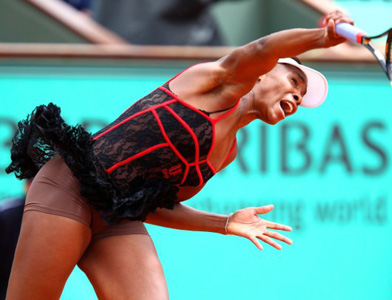 What do you think? Is Williams showing too much skin for tennis? Or do you think her outfits are fun and fresh?

Read On For More Venus Williams