Regis Philbin has announced he will be retiring from his morning talk show, Live with Regis and Kelly.

Regis Philbin is stepping down from his hosting duties on Live with Regis and Kelly. First Oprah Winfrey, now Regis Philbin? Why are all the good morning talk show hosts leaving our TVs? 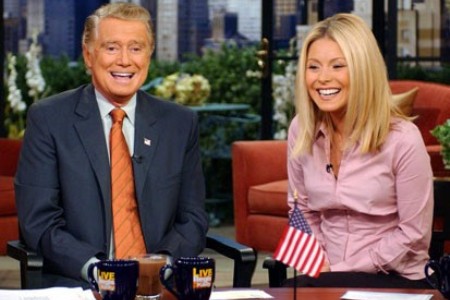 The 79-year-old host broke the sad news, and our hearts, on Tuesday morning’s Live with Regis and Kelly. This is no joke, he’s really retiring. “I don’t want to alarm anybody. This will be my last year on the show,” Philbin said.

Philbin then added, “It’s been a long time, it’s been 28 years. It was the biggest thrill of my life to come back to New York, where I grew up as a kid watching TV in the early days, you know, never even dreaming that I would one day have the ability, or whatever it takes, to get in front of the camera and talk to it.”

The popular talk show staple ended with, “There is a time that everything must come to an end for certain people on camera — especially certain old people!”

Regis Philbin has been hosting the morning show for over a quarter-century, first with Kathie Lee Gifford and most recently with Kelly Ripa. While details are still spotty as to the exact date Regis Philbin will take his final bow, we do have a rough estimation. Philbin revealed he will officially retire from Live with Regis and Kelly at the end of the summer.

Regis Philbin has been working the circuits since 1964 and there is no doubt that while he might be missing from the show, we’ll still see him around. If anything, the comedians of the world will continue to perfect their impressions of the zany guy who has become a household name. What do you think of the news that Regis Philbin is retiring? What do you think will happen to the show? Perhaps a new co-host? Tell us, we want to know!

45 mins ago
by Sara Kitnick