Piers Morgan debuted Piers Morgan Tonight on CNN with the queen of talk, Oprah Winfrey, jumping into the hot-seat as his first guest.

Piers Morgan isn’t holding back as the replacement for Larry King on CNN in terms of his guests, but does he ask the hard questions? Piers Morgan Tonight made its long-awaited debut on CNN, with the first guest being a woman who is no stranger to talk shows — Oprah Winfrey. 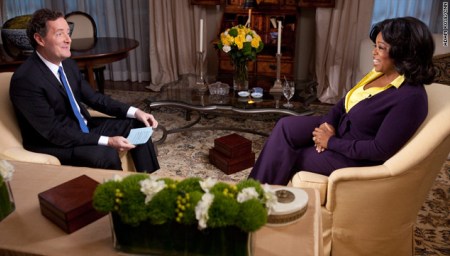 So, how did Piers Morgan fare interviewing the world’s unofficial ruler? He wasn’t nearly as hard-hitting as some thought he might be with Oprah Winfrey — but with that being said, he was entertaining. He didn’t pull any shocking information from Winfrey that we didn’t already know, like her relationship with Gayle King and her ability to avoid marriage — all old news. Oprah Winfrey has in the past opened up about her early pregnancy at 14 and on Piers Morgan Tonight she did once again.

“Getting pregnant was a result of bad choices, not having boundaries, sexual abuse from the time I was 9, 10, 11, 12 and 13,” Oprah told Piers Morgan. After being sent to live with her father, Winfrey felt she had to hide the pregnancy because of her father’s rules and ideals. She recalled him saying, “I would rather see a daughter of mine floating down the Cumberland River than to bring shame on this family and the indecency of an illegitimate child.”

Winfrey explained that she realized, “Before the baby was born, I’m going to have to kill myself.” She detailed the pain and “stupid things like drinking detergent and all that kind of crazy stuff that you do when you’re trying to get attention, when you’re really just trying to cry for help.”

Eventually, the baby did die in a hospital setting.

The night wasn’t all about Oprah Winfrey’s past issues, they also had some laughs. Piers Morgan bet her that he would land an interview with Michael Vick before she did, but that seemed more like friendly competition. Winfrey herself praised him on his opening show, but we’ll see how the show moves from here on out.

Did you check out Piers Morgan’s debut of Piers Morgan Tonight? If so, what did you think?

30 mins ago
by Grace Kang