Sandra Bullock denies there’s any hanky-panky going on between her and Ryan Reynolds. 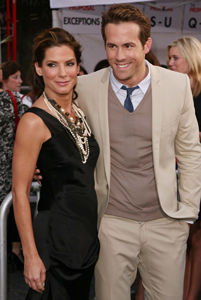 When Sandra Bullock and Ryan Reynolds were spotted spending time together in the immediate wake of his split from wife Scarlett Johansson, tongues started wagging that the longtime friends had taken things to the next level.

Bullock burst our bubble last night. During a red carpet interview with Al Roker at the Golden Globes, the actress said that she and Ryan Reynolds are just friends — without benefits.

“I think there will be a collective sigh amongst women across the United States when I say he’s not my lovah,” the 46-year-old mom said. “He’s just an amazing friend for 10 years… but I don’t get his loving after dark.”

In fact, Sandra Bullock said there is only one man in her life: one-year-old Louis.

Sandra is currently filming Extremely Loud and Incredibly Close with Tom Hanks, and was most recently seen sporting a rather heinous hairstyle with bangs at the Golden Globes!

read on for more sandra bullock