Another Monday has come and gone, and Brad Womack is still on a quest to find true love on The Bachelor. The women worming their way into bachelor Brad’s changed heart revealed secrets and shot an action movie this week, making week three mildly entertaining. 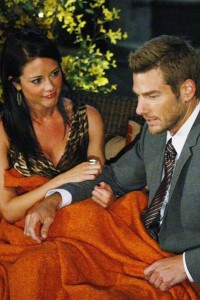 It’s come to our attention that no matter how outlandish The Bachelor becomes, we can’t stop watching. It is, and always will be, a true guilty pleasure. Brad Womack is too pretty to ignore — there, we said it — let’s move on to this week’s episode of The Bachelor, shall we?

Emily unloaded her heavy secret involving her daughter Rikki, while Madison, the one with the fangs, volunteered to leave. It was quite the emotional episode, giving us some juicy Tuesday morning water cooler talk.

Ashley S. got the first one-on-one date with Brad Womack, which was fine with us because they are kind of cute together. The two went joy-riding in a convertible, stopping at Capitol Records.

The couple recorded a version of Seal’s song Kiss From a Rose. Besides being awkward, it was a song Ashley used to sing with her father who passed away. The duo wrapped up their session and headed out to meet Seal himself for a private performance.

Ashley shared how her dad’s death is still with her and the song made her feel closer to him. The two bonded and she got a kiss from a rose courtesy of Brad.

Lindsay, Shawntel, Alli, Britt, Kimberly, Sarah, Chantal, Ashley H., Lisa, Stacey, Marissa and Michelle got the honor of attending the group date — and they filmed an action movie! The girls got to film their own scenes with the ultimate prize being a rose.

Chantal and Shawntel kicked some major booty as action goddesses but Michelle relied on her lips to rock the scene, assuring her kiss was more than a stage smooch.

During a pool party to celebrate the film, Chantal opened up to Brad about her divorce and father. Brad played the strong man, comforting the emotional Chantal.

Michelle stepped on Alli’s toes and time with Brad. Really, is it that surprising? Michelle wasted no time bad-mouthing the other girls to Brad and even proclaimed they’ll soon be doing the nasty — gross! Doesn’t matter though, Brad spent his rose on Shawntel. They ended the evening with a movie and wine.

We all knew from the promos what Emily’s story was, but it was still very sad to hear it come from her mouth. The girls encouraged her to tell Brad she once dated Ricky Hendrick, a staple in the NASCAR world, who died in a 2004 plane crash. The worst part is Emily was supposed to be on the plane and found out she was pregnant with the couple’s daughter shortly after Ricky’s death. She named her daughter Rikki. 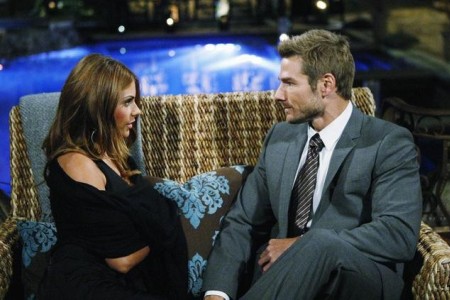 Womack whisked Emily off to Santa Maria where the two shared a lovely picnic. Later, during an intimate barn dinner, she finally revealed all of her past, including her relationship with Ricky and her daughter. Brad was so touched, he assured Emily he was even more drawn to her.

Before the rose ceremony, Madison decided that she was so moved by Emily’s search for new love that she wanted to withdraw from the show. Brad assured her he would accept whatever she decided.

Sarah, Kimberly, and Madison, who left during the ceremony, were given the boot, leaving Brad Womack with 14 girls on The Bachelor season 15.