Fans have been clamoring to know who will play Rachel’s two gay dads on Glee. The Fox hit is still skirting that question, but in the meantime, we are going to meet Kurt’s gay aunt! Anne Hathaway took advantage of the Golden Globes room and brokered a deal to play auntie to Globe winner Chris Colfer on Glee. 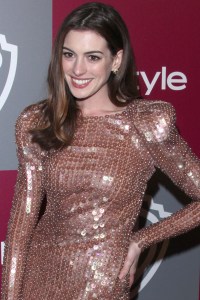 It was a Glee‘ful night at the Golden Globes, with the Fox show taking home the big award for Best Television Series: Comedy or Musical. Chris Colfer and Jane Lynch also won their first Golden Globes in the supporting actor and actress categories for the roles of Kurt and Sue Sylvester, respectively.

While the awards were being doled out, however, Anne Hathaway and her agents cornered Glee creator and showrunner Ryan Murphy to talk shop. SheKnows is quite sure he’s not complaining about the attack, especially as the meeting was a fruitful one.

“We just finalized a deal with Anne tonight to come onto the show,” creator Murphy told People. “She’s already created [her role]. She wants to play the lesbian aunt of Chris Colfer. Because everyone needs a lesbian aunt.”

“It was her idea, and someone like her, it’s sort of hard to say no!” executive producer Brad Falchuck told Us. “We don’t generally get excited about guest stars just for the sake of guest stars, but when you have someone like Gwyneth [Paltrow] or Anne Hathaway, where you can say, ‘They are amazing,’ they are big gifts.” 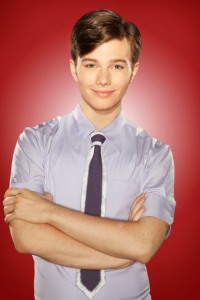 While Hathaway sealed the deal and even came prepared with her own song list, she wasn’t the only celeb to offer herself to Glee last night at the Globes.

“They always do,” Murphy revealed. “I can’t even think of who. But it’s so sweet. I think they support the show because it’s about the arts.”

The Oscar hostess has been quite open about her desire to land on the show and needless to say, her young TV nephew is over the moon about the big news.

“Anne Hathaway lesbian — that sentence is awesome!” Chris Colfer exclaimed to Us. “I am very much looking forward to that.”

Hathaway won’t likely be able to broker a similar deal for, say, Modern Family, at the 83rd annual Academy Awards on February 27.

She’ll be too busy serving as hostess alongside James Franco.