Nicole Kidman and Keith Urban are the proud new parents of a baby girl!

Nicole Kidman and Keith Urban sure know how to keep a secret. The couple is celebrating the birth of a baby girl, born to a gestational carrier, just weeks ago — and not a word was heard in the press throughout the pregnancy or immediately after the birth. 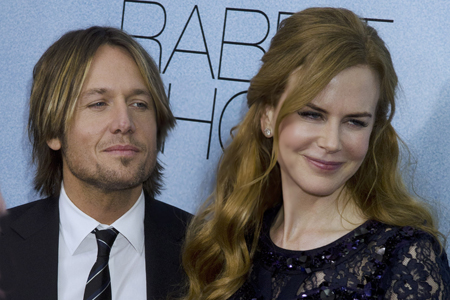 The star couple rented the entire top floor of Centennial Medical Center in Nashville for the surrogate and the baby and visited clandestinely, using the back door and service elevators.

Keith Urban and Nicole Kidman released a statement saying, “Our family is truly blessed, and just so thankful, to have been given the gift of baby Faith Margaret. No words can adequately convey the incredible gratitude that we feel for everyone who was so supportive throughout this process, in particular our gestational carrier.”

What the heck is a gestational carrier? TMZ reports that both Kidman and Urban are the baby’s biological parents, meaning her egg was fertilized with his sperm and implanted in the other woman’s womb. Fertility experts use the term surrogate to describe a carrier whose own egg was fertilized by the father’s sperm.

Nicole and Keith walked the red carpet at the Golden Globes last night — where she was nominated for her role in Rabbit Hole — without spilling their secret. The couple already has one daughter, Sunday Rose; Kidman also has two adopted children with ex-husband Tom Cruise.