We recap more of the best moments on the red carpet at the 2011 Golden Globes, including Natalie Portman chatting baby names, Robert Pattinson filling us in on his new hair hue and Sandra Bullock talking about her rumored relationship with Ryan Reynolds. 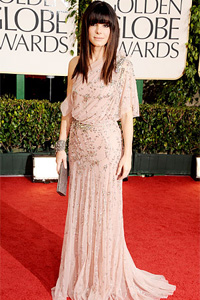 All of Hollywood’s A-listers were out on the red carpet at the 2011 Golden Globes, decked out in fringe and bangs — the hottest trends of the night. There were some awkward moments (Scarlet Johansson and Sandra Bullock, who is rumored to be dating her ex, Ryan Reynolds) both showed up in similar pink dresses, but overall the night went off without a hitch.

Check out what was seen and heard on the Golden Globes red carpet:

Sandra Bullock, on her rumored relationship with Scarlet Johansson’s ex, Ryan Reynolds: “I think there will be a collective sigh amongst women across the United States when I say he’s not my lovah. He’s just an amazing friend for 10 years … but I don’t get his loving after dark.”

Olivia Wilde, on who she is more psyched to run into — Justin Bieber or Robert Pattinson: “I have them both under my dress right now so I can decide when the time comes.”

Christina Aguilera, on if her 4-year-old son Max has seen Burlesque: “It’s not that racy. He will see it one day.” Does she want more kids in the future? “I do, I do!” she told Ryan Seacrest. 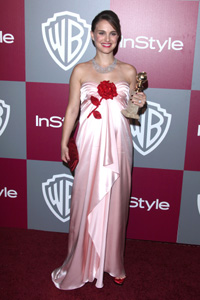 Black Swan’s Natalie Portman, on baby names: “I’m definitely thinking about it but I haven’t opened the book or anything,” she told E! host Ryan Seacrest.

Justin Bieber, on his relationship with his father: “My dad is in Canada and doesn’t get to see me often because he has two other kids. I love my dad and I’m really happy he is in my life.” And what is the story on those purple glasses? “My movie’s called Never Say Never. These are the 3-D glasses.”

Jake Gyllenhaal, on the most annoying part about filming sex scenes: “Nothing’s really annoying about [sex scenes]. I think people wonder what we wore to protect ourselves.” And what does he wear? “A little loincloth.”

Angelina Jolie: “Johnny’s funny — I’m still shocked that I got acknowledged as being funny, because I don’t think I’m funny.”

Golden Globe host Ricky Gervais, on partying after the show with a cold one: “Beer is not an alcoholic drink in England. It is like a soda,” he told Ryan Seacrest.

Nicole Kidman, on her first movie role (Rabbit Hole) since having her daughter Sunday: “The minute I read it I knew I could play it. It was such a gift of a role. Keith wanted me to go make this film. He gently nudged me out of the nest.” 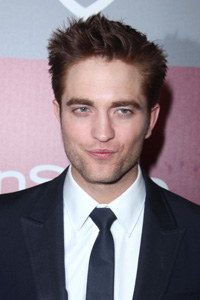 Robert Pattinson, when asked about his red hair: “I had to keep switching it between two movies,” he told Ryan Seacrest, referring to Water for Elephants and Breaking Dawn. “I thought it was a nice change.”

Edie Falco, nominated for her role in Showtime’s Nurse Jackie: “I rate award shows by my comfort level. Here, you eat, drink and walk around.”

Modern Family’s Sofia Vergara, on how she maintains her perfect shape: “I’m looking good for my age. Everything in moderation. I try to eat healthy, work out 2-3 times a week and wear my Easy Tone Reeboks,” she told Ryan Seacrest.

30 Rock’s Jane Krakowski, on if her pregnancy will be written into the show: “No one thinks Jenna would be a fit mother.” She also dished about waiting (she is 42 years old) to have a baby: “We waited a little while, I went behind the middle school, got pregnant, and now we’re announcing it to the world.”

Tina Fey, on writing Krakowski’s pregnancy into 30 Rock: “Her character would be the worst mother in the world. I think the state would come to the show and take her fake baby away.”

Tell us: Who was your favorite star from the Golden Globes red carpet?